The Early Adventures 1.3 - The Bounty Of Ceres 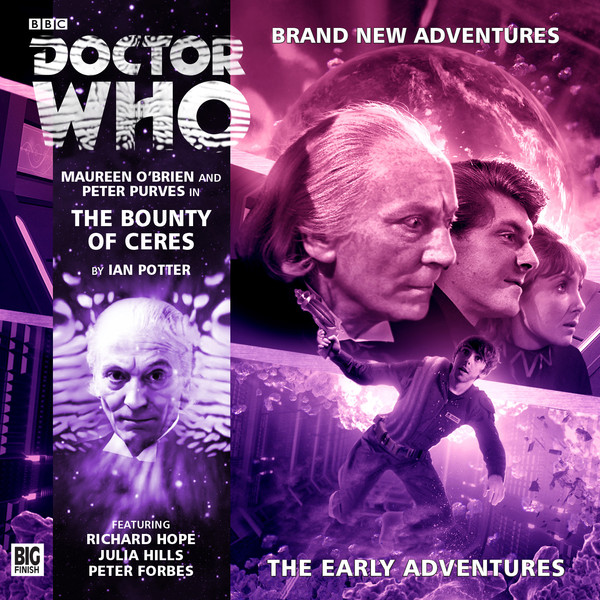 It’s not often I get wrong-footed by a TV show… having said that, here is a list of times I have been wrong-footed by them in the past:
Jonathan Creek – Satan’s Chimney, fooled me not once, but twice.
Doctor Who – Dark Water, didn’t see the Missy reveal coming.
Twin Peaks – got Laura Palmer’s killer completely wrong.
I solved Broadchurch, sussed out the ending of Breaking Bad, wasn’t Lost with Lost, but I digress…
This months Early Adventures story completely wrong-footed me, the wrong-footing was so complete that I didn’t even realise I was about to be wrong-footed – but stay with me as this is not the whole story.
The story begins with The Doctor making repairs to the TARDIS using the Monk’s directional unit. Things don’t go to well and soon The Doctor, Vicki and Steven are locked out of the TARDIS and in a sort of moonbase. It’s very very “Hartnell”, it’s slow, suspenseful and full of atmosphere.  We know what the characters know as they explore their surroundings and slowly, very slowly, the plot unfolds.
The pace is slow, almost sedate, and it takes two episodes for anything of note to actually happen. We find out our heroes are in a base on the Moon Ceres in an asteroid belt, a small crew is in charge of mining but not much else, then it all kicks off. Service robots go mad, a malign voice talks to the Doctor and one of the crew and the planet it seems is coming alive and seeking revenge for the pain that the mining has caused it.
Episodes Three and Four see the pace step up as the protagonists fight for their lives against the service robots and the dwindling air supply.  Then the rug is pulled out from under the listeners feet and the story you thought you were listening to isn’t quite that, it’s actually a lot nastier, contrived and spiteful.
Peter Purves is fabulous as Steven and his Hartnell voice is suprisingly good. Maureen O’Brien reprises Vicki with ease and the guest cast, especially Julia Hills as Qureshi, give great well-rounded and believable performances.  They are not heroes, just people at work having a very very bad day.
As I said before it is very slow to start, perhaps it would have been a better three-part story, and the almost cliche of a sentient planet is almost a cliche but any more would be spoilering.
So whilst definitely a bounty, the Bounty of Ceres is more of a Milk Chocolate Bounty than a Dark Chocolate bounty, and as such gets 7/10.
Posted by Blog Finish at 16:48