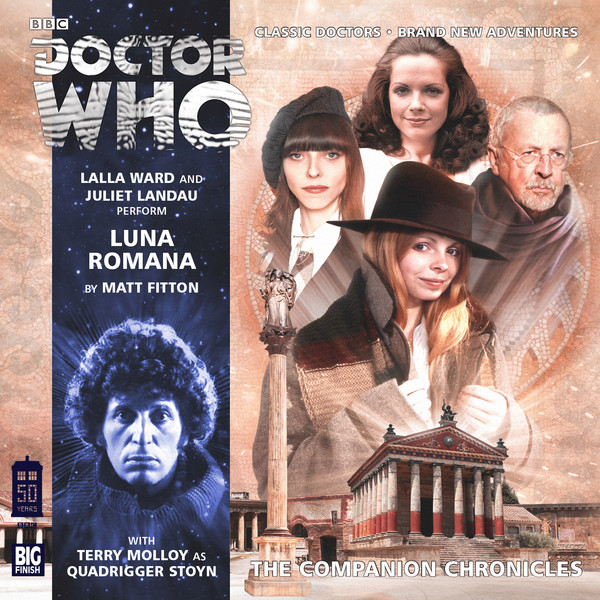 I will make no attempt to hide it, Romana II is my favourite companion of the classic era, I love her haughty, acidic wit, she was a perfect foil for Tom Baker, and this latest Companion Chronicle is a celebration of all things Romana, from her first, through her second to her third, yes you read right THIRD incarnation, played by Juliet Landau (Drusilla from Buffy the Vampire Slayer).

As with all the Companion Chronicles, this is more like a talking book than a full cast audio, with Juliet Landau reminiscing in the first episode about when she was in her first incarnation and on the quest for the Key To Time. Landau is an excellent addition to the role of Romana, she has the charm of Mary Tamm, the wit of Lalla Ward, and also a sense of melancholy and perspective that experience brings. The plot involves the Doctor and the first Romana turning up in Ancient Rome on the quest for the last segment of the Key To Time, the. Doctor takes time out to watch a play whilst Romana goes off in search of the sixth segment, soon getting into trouble.
Episode two has the Fourth Doctor and the Second Romana landing on a lunar theme park with robotic representations of Ancient Rome and other historical periods of earths history, there they meet Quadrigger Stoyn, played by Terry Molloy who is a Gallifreyan Engineer gone bad, and the villain of the piece, the two plot threads intertwine from this point onwards, involving all sorts of “timey wimey” shenanigans involving multiple Romana’s, time split (think Scaroth) Quadrigger Stoyn and lots of jumping back and forth in time.
So, is it any good? Well, yes and no in almost equal parts.
I loved the framing device of the third incarnation of Romana looking back, and the story itself is a lovely tribute to the lovely and much missed Mary Tamm, there are some lines in there which had me close to tears, all these lines are delivered by Landau with a sense of wonder, and regret and are just so moving and powerful in the image they create of a forever youthful first Romana always being out there somewhere in time on a perpetual quest for the Key To Time, I am welling up just thinking of it.
If there is one thing that let’s this story down it is the plot, it is way to convoluted and “Moffat Era” messing about with time for my taste, that’s not to say its a bad plot, just not to my taste, I must admit, I had trouble following the last episode.
So, as a character piece and tribute to the first Romana, it is an unmitigated success, and I hope we hear more of Juliet Landau very very soon, however, the plot left me cold, that’s not to say that others won’t like it, just not my cup of tea.
A game of two halves really, final score 6/10
Posted by Blog Finish at 07:29