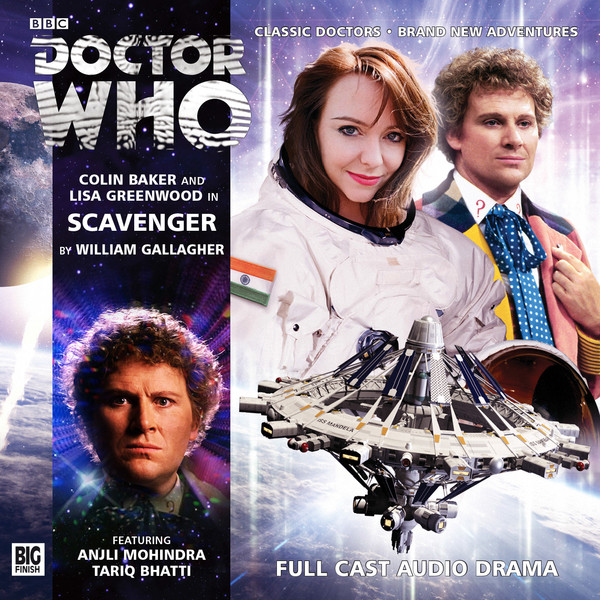 Only in Doctor Who could a story like Scavenger happen, and I really do mean that. What starts off as an homage to Gravity in episode one, turns in to Flight of the Navigator in episode two and by the end of episode four we have crossed over into a centuries spanning search for a lost love that ends the only way it can.

This is the last in a trilogy of three stories featuring Colin Baker as the Sixth Doctor and Lisa Greenwood as his companion Flip. They materialise on a space station in 2071 called the Mandela, meet a young Indian astronaut called Jyoti Cutler played by Anjli Mohindra (Rani from The Sarah Jane Adventures) and are soon caught up in events as Salvage 2, a rocket designed to clean up space junk, flies off course and heads towards the Mandela.  The Doctor heads to earth to help out at mission control, India now has a space programme as seen in the TV episode Dinosaurs On A Spaceship, and the Doctor co-ordinates events as Flip and Jyoti attempt to evacuate the Mandela. Things go very very wrong when the station is struck. Jyoti and Flip find themselves suited up, floating in space with the oxygen running out, and in to the story comes The Scavenger, a piece of alien tech lying dormant in orbit for five centuries, waiting for a new host, and Flip fits the bill nicely. At mission control, the Doctor has to deal with ego, politics and ambition to rescue Flip and prevent a disaster, but one of the team at mission control has been waiting a VERY long time for Scavenger to reawaken.
Long time readers may know I am not much of a “sci-fi” fan, preferring human drama, and this is very much a sci-fi story, but with very human elements, it’s just that the human elements take a while to get to. Almost a whole episode of Flip and Jyoti floating in space, then another half an episode trying to get Oxygen to Flip almost feel like padding, but it’s little moments that shine out amongst the main plot – a prince who has waited 500 Years to rescue his lost love, Flip becoming absorbed by Scavenger and trying to reassert her personality, the bittersweet meeting of the lost lovers and the very last scene are all gems, however, the story as a whole was not really my cup of tea, it just seemed a bit lifeless despite all the goings on, which is a shame as the concept was very interesting. Maybe it was just a bit too long, or maybe it’s just that this is not my type of story, or maybe the last two Six and Flip stories were so good that I expected too much? Who knows, not a bad story by any means, but more of an album track than a single.
Overall , I would say the Gravity of the situation warrants 6/10.