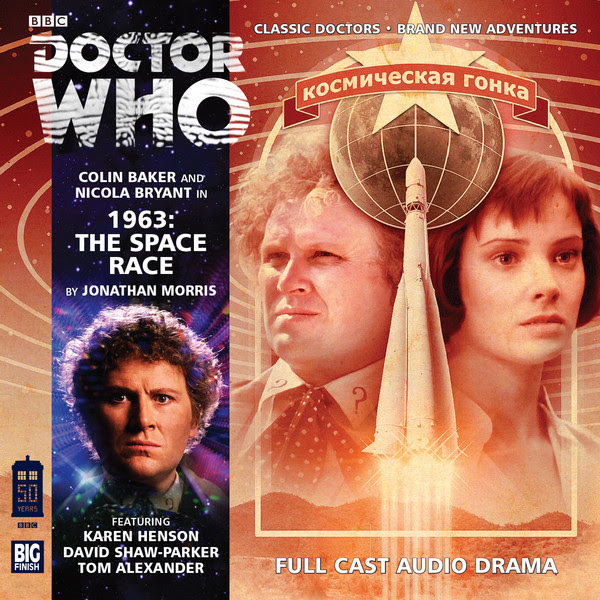 Some writers are like a seal of quality, Bob Holmes, David Whittaker, Ben Aaranovitch, Paul Cornell and RTD to name the best from the TV series. A seal of quality for me for the Big Finishaudio range is Jonathan Morris, and he is the writer of the fab 1963: The Space Race.

It’s a rarity for Big Finish to pair up “Old Sixie” and Peri in the main range, but boy am I glad they did in this story. In this audio Morris captures their spikey yet affectionate relationship perfectly.
So what about the story, well, due to a TARDIS malfunction a landing is forced in the Steppes of Kazakstan in early November 1963, and a few minutes late the Doctor and Peri have discovered four murdered Soviet Scientists, almost been blown up and then mistaken for the dead scientists, all in the first 10 minutes, it really does zip along at a breakneck pace.
They are soon embroiled in a mystery surrounding a missing cosmonaut who has been lost on the dark side of the moon, it reminds me very much of the Ambassadors of Death, and, as most people listening to this play would have seen that story, then Morris plays with the listeners expectations, especially when contact is restored with the capsule, when it is finally brought in and the capsule is opened, the contents are not what anyone, characters or listeners, expected…..
To give away any more would spoil the surprises that Jonathan Morris has written for us, but what we get is part Cold War espionage thriller, part base under siege, part space opera but all pure classic Doctor Who – and the star of the show yet again is Old Sixie himself, Colin Baker. Listen out during episode three when Baker gives us one of those marvellous grandstanding speeches that Doctor’s do so well on the subject of the human race, the hairs on the back if my arms stood on end, it really is up there with Tom Baker’s famous “Homo Sapiens” speech from Ark in Space.
Sound design is superb, really atmospheric, you do get the impression that you are listening to a play set in a military bunker and the music it suitably “soviet” in its feel.
Overall, a cracking multi-layered thriller full of surprises written by one of the best Doctor Who writers in any format – come on Cardiff, commission Jonathan Morris for a TV script!
Final Score 8.5/10