The Early Adventures 1.2 - The Doctor's Tale 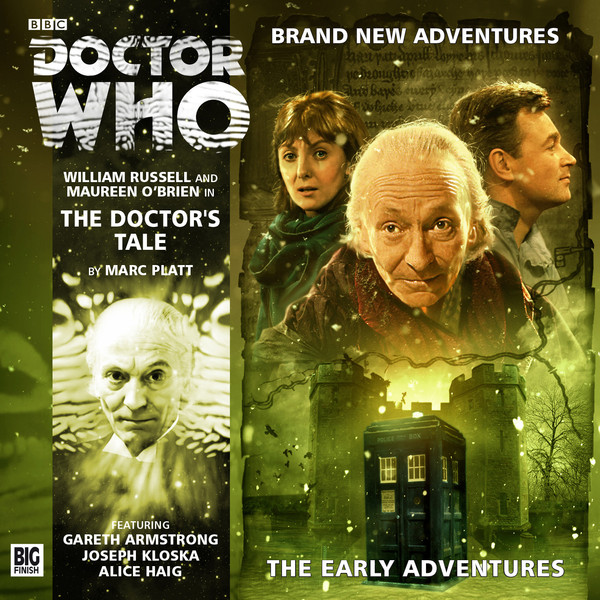 As long-time readers and long-time contributors to Planet Mondas will no doubt be aware, I am a fan of “Nu-Who”. I like the charactarisation, the music, the acting, the emotion, the so-called soap opera plots. I like the fact that the companions feel real, have character development, a life and a family. The one thing (apart from the casting of Matt Smith) that I would change would be to have a few honest to goodness pure historical stories. Sure we have had celebrity historical stories, but they all involved a sci-fi element, I would love to see the Doctor in the English civil war for example, stuck between Roundheads and Cavaliers, seen as a traitor by both, and trying to get away with his life. I would further enjoy it if King Charles and Cromwell were just King Charles and Cromwell and not two alien warlords playing a war game on a distant planet with Robot Soldiers. Rant over.
This months early adventures release makes me glad we have a Big Finish, we have a Hartnell era pure historical, but it’s also set in a period of history I know little about so it serves the series original remit of being educational too.
The Doctor, Ian, Barbara and Vicki land in England in the early 1400′s. King Richard II has just been usurped by King Henry IV and it is a time of change and of distrust. They are taken in to an abbey where The Doctor gains the position of tutor to young Isabella, the wife of deposed King Richard II, and when the fearsome Archbishop of Canterbury Thomas Arundel makes an unexpected appearance at a banquet at the abbey, a string of harrowing events are set in motion.
Lead by William Russell and Maureen O’Brien a small cast brings this story to life. You can feel the edginess and distrust of the supporting characters, England is a land ruled by fear and the face of that fear is Thomas Arundel.
I like the Hartnell era, it did time travel properly, none of this timey-wimey malarkey. History could not be tampered with, you were part of events and you get the feeling that the Doctor is helping history along.
The story has an epic feel over its four extended episodes with our protagonists getting split up and all making their separate ways to the Royal Court, and to be honest, the length is perhaps this stories only failing, it seems to take a long while for the plot to get going and when it dies there seems to be a lot of needless too-ing and fro-ing, along with double cross after double cross – my head was spinning at certain points. Perhaps as a three- parter this story would have been tighter.
Borrowing a little front Nu-Who this is also a celebrity historical as our heroes get to meet Geoffrey Chaucer and help preserve his Canterbury Tales for posterity.
A very good, very Hartnell era historical then, not perfect, but doing just what it says on the tin, and, serving an educational remit. I really want to find out more about King Richard II, he seemed from the dialogue a renaissance man a hundred years too early.
As Shakespeare put it:

For God’s sake, let us sit upon the ground
And tell sad stories of the death of kings;
How some have been deposed; some slain in war,
Some haunted by the ghosts they have deposed;
Some poison’d by their wives: some sleeping kill’d;
All murder’d: for within the hollow crown.

A very apt quote which captures the mood of the piece. 8/10.