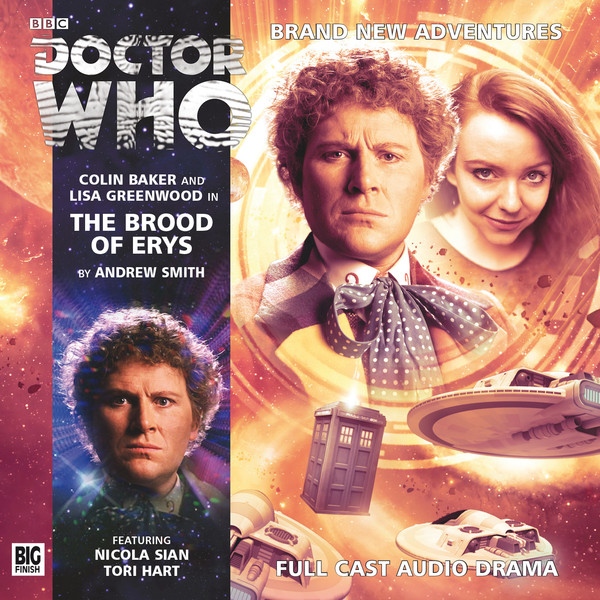 Parenthood. In a word, that’s what The Brood of Erys is about. Are children products of their parents attitudes and what if children want to leave, what is the bond between parent and child and is it a two way street?

The Brood of Erys begins with the TARDIS materialising in a quarantined system, the Sixth Doctor accompanied by Flip try to heed the warnings and leave, but are boarded by the cherubic Drachi, small, child-like and immensely cruel creatures who delight in mentally tormenting their prey, they kidnap Flip and it’s up to the Doctor to rescue her.
These Drachi are the “brood” of the story, children of Erys, a living moon (think House in The Doctor’s Wife), who is as cruel as his children. In fact, this is one of the bleakest and most cruel stories Doctor Who has produced; the glee with which the Drachi and later on Erys torment their victims is very unpleasant, repellant almost, they are like children who have had no boundaries, no-one has ever said no to them, tormenting purely because they can and no one will tell them no. Unpleasant, cruel, but a product of their parenting? Maybe, or are they more Lord of the Flies?
That’s not to say this is a bad story, it is actually compelling, and I like that the imagery made me squirm and feel uncomfortable, I like to be challenged when listening to audios and this is a very challenging story.
I love the Sixth Doctor, he embodies “never cruel or cowardly” in this story, in fact his compassion shines through in the resolution, where the Seventh Doctor would have unleashed a terrible vengeance, old Sixie proves he has hearts as big as the universe. Lisa Greenwood continues to impress as Flip, and the guest cast, especially Nicola Siana as Sarra Vanser and Glynn Sweet as her father, Elgin, deliberately mirror the twisted “family” of Erys and it’s brood, more than that and I would spoil several revelations that keep the story ticking along.
A very unpleasant, uncomfortable, and at times challenging story, but very well acted and written and utterly compelling, and it ends on a conversation setting up future stories.
Overall, a none too cruel or cowardly 8/10.
Posted by Blog Finish at 07:33