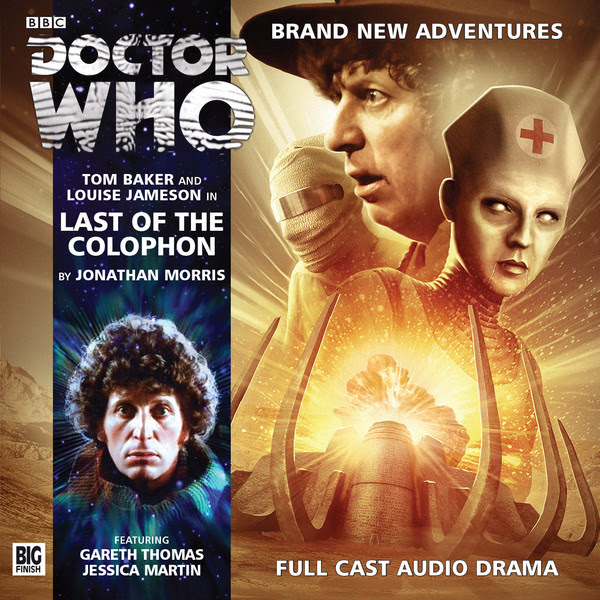 Harking back more to the gritty Hinchcliffe era, this story could fit in quite easily between Robots of Death and The Talons of Weng Chiang. We begin with the Doctor and Leela arriving on the abandoned, seemingly dead planet of Colophos on a holiday, great dialogue from Tom Baker and Louise Jameson, really witty stuff about it being cold, no actually bracing, Leela enquiries as to what bracing means, the Doctor replies it’s what people on holiday call the cold!
Their “holiday” is soon interrupted by the arrival of Surveyor Hardwick and Deputy Surveyor Sutton, who, would you believe are surveying the planet, they then receive a distress call from a ruined building and decide to investigate.
How they enter the building is quite reminiscent of a Tomb of the Cybermen, deadly traps and all, but once inside, they realise they are locked in, and meet the occupant of the building, the infirm and ancient Morax, played with a sort of maniacal glee by Gareth Thomas. He is kept prisoner by his android nurse Torvik, as he once commanded her to keep him alive at all costs, and now he is virtually immortal, clad in bandages and kept alive by a life support unit.
Or maybe not….
What follows is a tense “base under siege” story with a very high body count, it’s gripping, it’s bloody and it’s tense, think Horror of Fang Rock meets Tomb of the Cybermen and you won’t be far from the mark.
Voice plays an important part in this audio, and again Louise Jameson shines as Leela she is inquisitive, intelligent and cunning, traits reflected in the Doctor as the manipulative side of 4 makes a rare appearance in the resolution. It really is a grim story with a seemingly unstoppable foe, quite downbeat really despite all the banter, the humour seems to have a gallows property again more like a Hinchcliffe era story than a Williams era one.
The incidental music is a spot on pastiche if the era, so hats off to the composers.
So, overall, I appreciated it, a great cast and a great plot, but found it a bit too grim for my taste, fans of seasons 14 and 15 will love it, but I am more of a Graham Williams era Tom fan, however it is in no way a bad story – I give it a totally transparent 7/10.