THE EARLY ADVENTURES 3.4 - THE SONTARANS 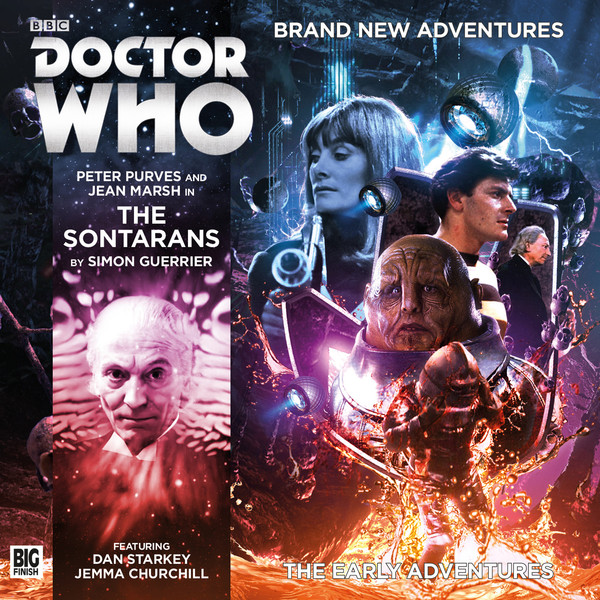 I really hope I don't come over all "Mary Whitehouse" in this review, because that is not who I am at all. Violence has its place in stories, it really does - I never understood her problem with the Hinchcliffe era (but then again she inadvertently created the Williams era so bonus points there). What am I doing! I am almost giving backhanded compliments to one of the most destructive forces in the history of TV. But I have a point to make.
You see The Sontarans is two things - thing one - it is a very Hartnell era quest/chase/race against time story in which our heroes team up with some other character to overcome an enemy - think The Daleks and you wont be too far off for the overall structure. Thing two - it is very violent. Not cartoon violent, but violent in an upsetting way, not to give too much away but at the end of part three and beginning of part four there are some torture scenes that are out of character for the Hartnell era and cross the line as to the type of thing that the character of the Doctor would find acceptable and also the audience would find acceptable. Its a bit too much. Apart from those scenes this is a rip roaring boys own adventure and goes something like this….

On a flower covered moon between two gas giants The First Doctor, Steven (Peter Purves) & Sara (Jean Marsh) hope for some much needed rest and recuperation from their battles with The Daleks. No such luck as The Doctor is about to encounter one of his greatest enemies for the first time - this is the first meeting between The Doctor & the Sontarans. Sara Kingdom already knows about the Sontarans, in fact the period they have arrived in is ancient history for her - and as The Doctor & his friends team up with the Space Security Service team sent to disable the Sontaran space canon and protect the space lanes Sara finds herself in a position normally inhabited by the Doctor and cannot let any future history slip out.

What follows is a pretty standard “quest” story for the most part - our heroes are separated from the TARDIS and need it back, peril, bravery & betrayal - helping the indigenous population - you get the picture but it is elevated beyond this by the performances of the cast - especially Peter Purves in THOSE scenes which I alluded to earlier, this is definitely Doctor Who and not Game of Thrones, so as out of place as the torture scenes are Peter Purves sells them utterly as both Steven and The Doctor. His performance as Hartnell is stunning, never better and completely convincing I SAW Hartnell during this story, not just someone else reading his part - and boy is The Doctor wily in this one, using the Sontarans fixation with war and honour against them, his verbal sparring with the Sontaran commander (Dan Starkey) is sublime and pure First Doctor. The rest of the guest cast give it their all too - Jemma Churchill as Captain Papas providing grace under pressure and the stoic Corporal Gage (John Banks) keeping calm and carrying on as if he has a different mission to the others.

But I cannot get those torture scenes out of my head - they bother me, and that is probably a good thing, as violence should never be normalised, and I should be taken out of my comfort zone once in a while - the purpose of art is to challenge and this did challenge me - a difficult but a rewarding listen and “Peter Purves - he gives good Hartnell!” (if I see that on t-shirt I know where it has come from ) a challenging 7/10.
Posted by Blog Finish at 09:40