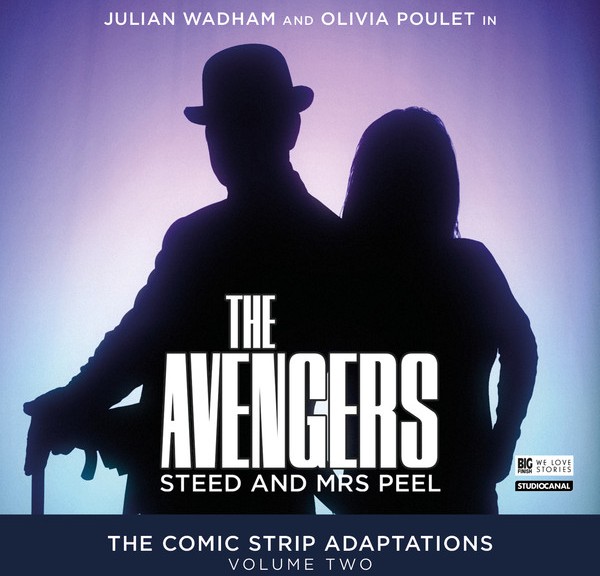 In an England that never really existed is a retirement home, and in that retirement home is a man - an old debonair man with a twinkle in his eye and a carnation in his lapel - this is where John Steed spends his twilight years with other characters from a slightly off kilter world - Roger Moore's Bond, the Graham Williams era Tom Baker & the Adam West Batman, they while away their days reminiscing about times that were far too outlandish to have really happened, and as the stories get more and more outlandish Steed reaches for his the telephone, dials a number and waits, eventually the call is answered, an elderly lady with a cut glass voice and a hint of irony says "hello Steed”, Steed replies “Mrs Peel, were needed” - later Mrs Peel visits the retirement home, no longer in a cat suit, but elegantly elderly and she and Steed regale the other inhabitants of this not quite real retirement home in the never was real England to four tales of when they left the TV for the comic strip medium……

Or at least thats how I see it - I love the word that The Avengers exists in, or to put it more accurately I love the world that seasons 4, 5 & 6 of tThe Avengers exist in - a slightly skewed technicolour version of ours where villains are madcap, where the heroes are debonair, dashing and delightful and where the plots are completely bonkers - and its this sense of the zany and surreal slightly out of focus technicolour wonderland that Big Finish have captured so splendidly - the Steed and Peel in this box set ARE the Steed & Peel of the TV series (even if they are played by different actors) they are the characters we know and love - dry humour, wry smiles, fashion, food, fast cars, insane villains and a sense of the groovy - its all there and it is spread very nicely over four stories:

2.1 Playtime is Over by Robert Khan and Tom Salinsky

Completely “Avengers” from beginning to end - impossible robberies, creepy children, a creepier toymaker and an admirer for Mrs Peel - bankers from the “were needed” to the tag scene at the end, it falls from the audio into the listeners ears and transports you back to the zany era in which it was set. Poulet and Wadham as Peel & Steed have oodles of chemistry and attack each scene with tongue, if not firmly in cheek then most definitely heading in that direction. Wonderful stuff.

2.2 The Antagoniser by Paul Morris and Simon Barnard

I love the character names in The Avengers, this has a Professor Verbatim and a Mr Partridge - lovely. It is also the tale of a mad Professor who was spurned and laughed at on a chat show and is getting revenge by making animals go all aggressive with his “antagoniser” and wreaking his revenge on those who laughed at him. In any other series this would be a step too far, in The Avengers this is par for the course - thrill as Mrs Peel is nearly fed to Pirañas - wow as our heroes climb trees to escape a herd of rampaging cows - its one of those stories that really feels at home in Avenger-land - outlandish, over the top and fabulous.

2.3: The Mad Hatter by Matt Fitton

Steed is a famous hat wearer - it was only a matter of time before someone tried to see him off with a killer hat wasn't it? Throw in to this a Princess from the fictional country of Varania on a Royal visit, a spurned lover and a henchman with the wonderful name “Tom Bowler” and you have a kooky crazy Avengers classic.

2.4: The Secret Six by John Dorney

Remember the TV episode "The Superlative Seven” ? well this is a similar sort of romp - Steed and Peel go to a marvellous party where you don't know the host, but he knows you - and are almost immediately involved in a plot to kill them by the not so “Secret Six” a team of Super Villains - outnumbered six to two Steed and Peel have to survive a rather unpleasant weekend in the country - and with the lure of a rather well stocked wine cellar they really do need to survive, because it really would be bad form to let all that vintage go to waste :-)

As Avengers stories go these are just fab and the “feel” is just right - close your eyes and you can see Steed & Peel, you know what the villains look like and can imagine the best  (and worst) character actors of the time playing them and chewing the scenery until there is nothing left - this is The Avengers that everyone remembers all condensed on to four shiny CD’s or a fibre delivered download - but regardless of the format the debonair, wry, bonkers, sophisticated adventure of Steed & Peel are timeless. And in that England that never really existed, in the retirement home for the off kilter, tea is being cleared away, Mrs Peel kisses Steed on the forehead as he dozes off and whispers 9/10 Steed, and I hope we can tell some more stories to you and your friends very soon.

This title was released in November 2016. It will be exclusively available to buy from the BF website until December 31st 2016, and on general sale after this date.
Recreations of the comic strip adventures of Steed and Mrs Peel which appeared in Diana magazine in 1966 and 1967:
2.1 Playtime is Over by Robert Khan and Tom Salinsky
Steed gets toyed with, Emma has an admirer.
A series of impossible robberies have plagued London. Called in to investigate, Steed and Peel find themselves up against some very deadly children. Or do they?
2.2 The Antagoniser by Paul Morris and Simon Barnard
Steed catches a bite, Emma is a little cowed.
Several noted scientists have died in unusual circumstances, and Steed and Peel find themselves up against a deadly weapon. But who is behind it? Does an old TV broadcast hold the answer?
2.3: The Mad Hatter by Matt Fitton
Steed charms a princess, Emma buys a hat
When Princess Helga of Varania comes to England, all the nation is charmed. Well, nearly all. A dastardly assassination plot is being prepared and only Steed and Peel can stop it. Who wants to be a milliner?
2.4: The Secret Six by John Dorney
Steed hits a boundary, Emma shall go to the ball
When an invitation to a fancy dress party leads to murder, Steed and Peel face the fight of their lives. The world’s six deadliest criminals want them dead – and will stop at nothing to make sure of it!
Written By: Paul Morris, Simon Barnard, Matt Fitton, Robert Khan, Tom Salinsky, John Dorney
Directed By: Ken Bentley