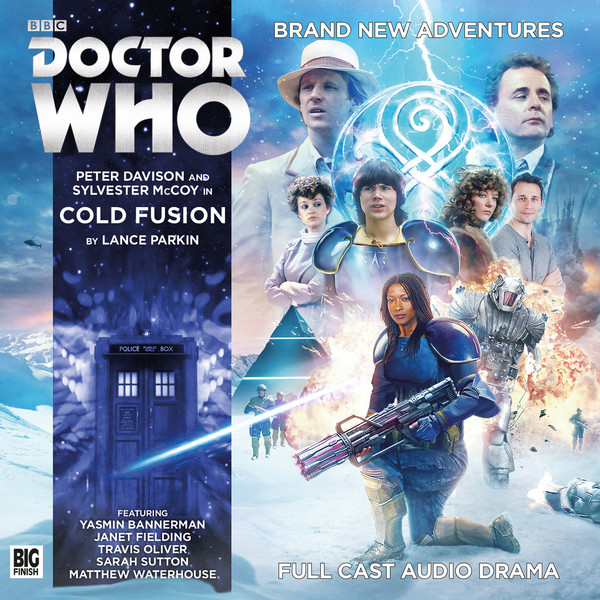 Why don't I remember this one so well? I read the novel in the 1990's and have vague recollections of Five meeting Roz Forrester at a railway station, but apart from that zero, zilch, nothing. Which in a way is good as I came to this release fresh with no expectations of what it would be like. And what is it like? well, thats really really difficult to say - its complex, its involved, it harks to the ancient past of Gallifrey, it has lots and lots of Virgin era continuity regarding Time Lords being born from looms and yet it is still completely and utterly a Fifth Doctor story. It sounds like a Fifth Doctor story, the incidental music is definitely Fifth Doctory - but this is a Fifth Doctor story run through the blender of Virgin’s take on Doctor Who - a brave and bold take on the Universe of Doctor Who, a story so good that one Doctor just isn't enough, this one has two Doctor’s AND it has The Doctor’s Wife (or maybe not). Those of you expecting a 1990’s appearance from River Song are going to be disappointed - the “wife” in question here is someone for more complex and far more significant than even her of the magnificent hair……

But where to start? There is rather a lot to this story as I have said, but a very rewarding one, we have the Fifth Doctor, The Seventh Doctor, Companions Chris Cwej (Travis Oliver) Roz Forrester (Yasmin Bannerman), Adric (Matthew Waterhouse), Nyssa (Sarah Sutton) & Tegan (Janet Fielding) we also have a large supporting cast lead by the mysterious Time Lord “Patience” (Christine Kavanagh). The story has an air of desperation and a race against time the sort of “muddling through” we got in the Fifth Doctor’s era on TV - BUT it also features the Virgin version of the Seventh Doctor so plays out as a machiavellian conspiracy with every move planned meticulously, but when you are plotting against your own past can things really be so straightforward? But what of the plots and the machinations? On a frozen planet the Fifth Doctor fresh from his regeneration arrives with Adric, Nyssa and Tegan and is soon caught up in events involving the sightings of “ghosts” - as he and Adric investigate, Nyssa & Tegan book in to a hotel where a n obviously fake Australian calling himself “Bruce Jovanka” arouses Tegan’s curiosity. At the same time The Seventh Doctor is investigating dangerous energy experiments conducted by the Earth Empire and the scene is set for the two most unlike incarnations of The Doctor to meet, breathless enthusiasm, decency and honour are about to collide with cold scheming. And then there is “Patience”.

Patience - its not often I get cold shivers with Doctor Who any more, but the scenes of mental contact between Five and Patience did just that. “Patience” (in quotes as it isn't her real name in the same way as “The Doctor” isn't our heroes real name) through her fragmented memories gives us a vision of her past on ancient Gallifrey, she is from the old time, she was born of the gene looms, had 13 children and her husband? Oh now that is complicated, but it may have been “The Other” who was possibly a past incarnation of The Doctor. But there is most definitely a connection, the Fifth Doctor displays an emotion and an intimacy with “Patience” that is completely absent in his interaction with other characters, Tegan is embarrassed when he sees Five place his hand on "Patience" thigh - mild stuff for those of us used to his intimacy with River, but groundbreaking in the 1990’s. And through Five & “Patience” interaction we gain vital information about the ancient times on Gallifrey and learn how “Patience” arrived on the Ice Planet. I have chills even thinking about it and long time fans will do too because these glimpses of ancient times give us a huge amount of backstory for The Doctor, not enough to ruin the mystery, but enough to leave us wanting more. A lot more.

As for the rest of the story companions of Five & Seven meet up and go through various ordeals involving the Earth Empire and the Order of Adjudicators the ruling “Scientifica” and a bunch of terorrists (or freedom fighters) who want to end their rule. And then there are the Ferutu - a species from an alternative Universe where Magic is real. In this Universe they are the Lords of Time and do not agree with non intervention, they help weaker races and use their almost infinite power to maintain an harmonious universe - surely that cannot be a bad thing? A universe where Daleks and Vampires are confined to the fringes, where peace, harmony, wisdom and compassion are the way of life? But at what price? AND THEN there is the meeting of Five and Seven - two more different incarnation of the same Time Lord you could not envisage, each with if not contempt, then a healthy disdain for each other and their methods. AND THEN it is all linked in to Day of The Doctor and that really is the feather in the cap :-)

Saying I enjoyed this is a bit of an understatement, saying I welled up with tears is not. Because I did. After witnessing “The Return of Doctor Mysterio" on TV last night and being completely left cold and disengaged, Cold Fusion was the tonic I needed, a classic for the ages, without a doubt the best of all the multi Doctor stories and a strong contender for Doctor Who release of the year. The Ferutu tells Five that this is not the last time he will meet Patience, as I recall the novels didn't follow this up - can I ask Big Finish to take this dangling plot thread and make it magnificent? Because this release was wonderful and very much “My" Who from “My” era made real by Big Finish. Magnificent, truly magnificent.
Posted by Blog Finish at 09:42