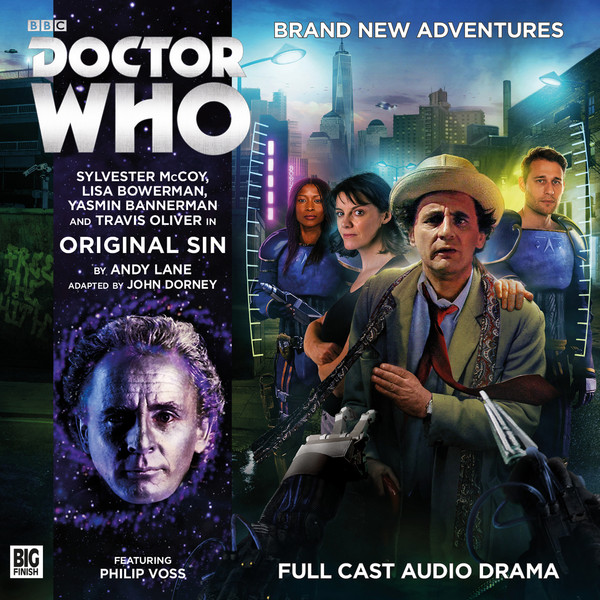 And we are back in the 1990's. Not the barren decade that some would have you believe, but a melting pot of creativity, thinking the unthinkable, writing the unfilmable and paving the way for the 2005 Doctor Who renaissance. Yes indeed ladies and gentlemen, we return once again to the worlds of the Virgin New Adventures, and what a wonderful world it was. Contrary to our old friend "received fan opinion” these were heady times - Who was being written by those who genuinely cared, but more than this these were writers with genuine vision - Paul Cornell, RTD, David A McIntee, Jim Mortimore, Andy Lane - all pioneers who saw no Who on TV as an opportunity and not an ending. In Love and War Paul Cornell gifted us Professor Bernice Summerfield - bust just like the TV show this book series evolved and new companions were needed to give the range a new direction - it fell to series stalwart Andy lane to introduce two new companions Chris Cwej & Roz Forrester in the novel Original Sin - and now twenty one years later Big Finish have brought the story to life.

So what is Original Sin, and why is it so important? On the surface this is a hard boiled sci-fi adventure, quite typical of the epic scale future history style of the time. It has The Doctor (Sylvester McCoy) at his mysterious manipulative best truly he is Times Champion here, casually striding through the story with a confidence bordering on arrogance - he is truly charmed. It has Bernice Summerfield (Lisa Bowerman) making wise cracks and in complete synchronicity with The Doctor - for them both the events of Human Nature (the novel) have only just happened so their bond has deepened due to the traumatic events that they both suffered. It also introduces Chris & Roz. Chronologically that is, we first experienced them in the May 2015 adaptation of Damaged Goods (review here) in the forms of Yasmin Bannerman (Roz) & Travis Oliver (Chris) - but here we meet them at the beginning - Roz is an experienced cynical Adjudicator (think Judge as in Dredd) and Chris is her Squire and is a lot less jaded. They are sworn to uphold the law in Spaceport 5 Over-city (the UK to you and me) their world view and their whole way of life is about to be shaken up when their ordered life as part of the machinery of the expanding Earth Empire is in a head on collision with the world of the Doctor, because the Earth is defending in to chaos, and where there is chaos there is always the Oncoming Storm, there is always The Doctor.

So, the Murder rate is rising on Earth, the adjudicator secular dismisses it as all the murders have been solved - but to Chris Cwej something just does not add up, and this is the tip of a very rotten iceberg at the heart of the Earth Empire - why are the powers that be so keen to cover this up - what does the deranged Professor Pryce (Jot Davies) know about the dangerous icaron particles that the Doctor has detected? why is the process of “body beppling” (literally transforming your body into something else for fashions sake - when we first meet Chris he looks like a Teddy Bear!) so popular and is it linked to the spate of murders? and at the heart of it all is a villain from the far and distant past, someone who has been waiting a very very long time for the Doctor to arrive, and he really isn't the man he once was?

Its a big story and a lot happens - there is a palpable sense of the epic and of a threat and of society unravelling. And then there is the villain of the piece - he is all knowing, he is everywhere - and in this version of the story he is frustratingly unnamed, but being Who fans I am sure you can work out who he is meant to be. For all its future history, Mega Cities, lies and revelation, for all the changes that Chris & Roz go through in the two hours of the story - the ending somehow feels earned - the characters have suffered for the plot, Chris and Roz have proved their worth and earned their place aboard the TARDIS. However my favourite scene occurs at the beginning of episode two, its a short chilling scene where The Doctor & Professor Pryce discuss the morality of killing and when it can be justified - it made my blood run cold, especially when the conversation is revisited later in the story. Even after the events of Human Nature - Seven was in a dark place at this point in his life - his personal morality was something that could be reimagined to fit a particular set of circumstances - he was an ambiguous character, and never ever more dangerous, ancient or terrible. THIS was MY Doctor - and I mourned his loss when the TV movie came around and a golden era of creativity ended. Big Finish have made a dream come true in adapting the 1990’s stories for a wider audience - and while Original Sin isn't my favourite of the New Adventures in still deserves 9/10 for being brave enough to exist in the first place. Now then Big Finish, hows about Lungbarrow…..