The Worlds Of Doctor Who 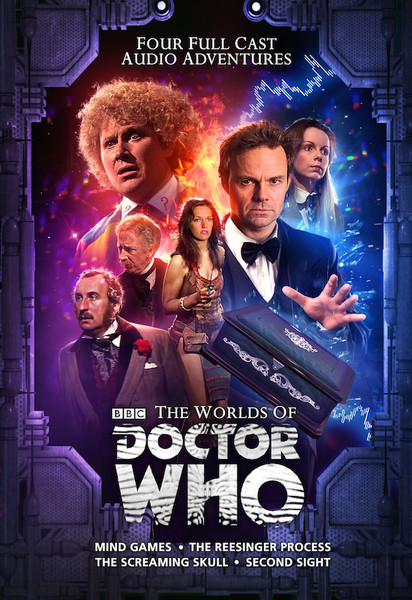 I finished listening to this a few days ago, it’s a big story and needed a lot of thinking over before putting fingers to keyboard.
Usually I start my reviews with a bit of a preamble (or incoherent ramble!) about how I am feeling, what memories the story stirs up, the music I am listening to.  If you are a long-time reader you will know what I mean, if not Hello and thanks for reading. Anyway, and I don’t know why, but this story reminded me of Tubular Bells by Mike Oldfield. Maybe it’s the ebb and flow of the story, that it’s broken up into distinct but linked chapters in the same way that Tubular Bells is broken up into movements, or maybe it’s the way both have a haunting melody as their constant.  Actually that’s probably it, whilst Tubular Bells has, well, Tubular Bells as its theme, the Worlds of Doctor Who has a haunting rendition of Ding Dong Bell played on a music box.  It’s really chilling. Yes children’s nursery rhymes as a horror staple are a bit passé these days, but when done as well as this it can be indulged.
So the story – it really does encompass the whole worlds of Big Finish Doctor Who, an epic spanning the centuries told in four parts, each starting different friends of the Doctor.
Part One is called Mind Games written by Justin Richards and features my favourite characters Jago and Litefoot.  I just can’t get enough of their bi-annual box sets of breathtaking bonhomie. Ok, no more alliteration I promise. To the uninitiated Henry Gordon Jago & Professor George Litefoot appeared in The Talons of Weng-Chiang with Tom Baker, were revived by Big Finish for Companion Chronicle – The Mahogany Murderers and then for a series of box sets, series 8 is due in October 2014. So, Jago has booked an act in his theatre, the act is Mr Rees a hypnotist who uses a music box playing a haunting version of Ding Dong Bell, but those who take part in his act are committing terrible crimes and then thinking they dreamed it.
Jago and Litefoot are on fine form (when aren’t they?) and get the story going, Rees is the worst sort of villain, not using his powers for any gain or power, but because he can. A great start to the story and a great introduction to Jago and Litefoot’s adventures too.
Part Two is called ‘The Reesinger Process’, again by Justin Richards. We have moved on from the 1890′s to the 1960′s and the story is continued by the Counter Measures team, Group Captain Gilmore, Rachel Jensen, Alison Williams as seen in Remembrance of the Daleks along with their boss Sir Toby Kinsella. Several high ranking civil servants and Military personnel have been inexplicably committing random murders, the Counter Measures team’s investigation leads them to the Reesinger Institute, a place where anti interrogation techniques are taught. The institute is run by brother and sister James and Stephanie Wilton and on her desk, Stephanie has a certain music box… Full of Cold War era paranoia it feels like it could have been a show made by ITC in the 1960′s and the team are on fine form. I really do like Sir Toby, even though I shouldn’t. Again the story ends with a hook for the next part.
Part Three is The Screaming Skull by Jonathan Morris.
An older Captain Mike Yates seeks the help of Captain Ruth Mathieson (Daphne Ashbrook) and Charlie Sato (Yee Jee Tso) to enter The Vault, an archive of dangerous alien artefacts gathered by UNIT over the years.  A team of soldiers have been sent in but the Vault has gone dark. Yates, Mathieson and Sato have an hour to solve the problem in the Vault and get out before it is destroyed. Wow, this one drips with atmosphere, it’s the most overtly “horror” of all the stories, having not heard any of the previous “Vault” stories I didn’t know what to expect, but my expectations were exceeded. A tense heart in mouth, edge of seat story full of twists and turns, I will definitely be seeking out the other Vault Stories.
Which brings us on to Part Four, Second Sight by Nick Wallace and Justin Richards.
Not a lot I can say about this without spoiling, but suffice to say, things are bad.  The Doctor has been called in, Romana has sent Leela to help and the true extent if Rees’s plans are revealed. It’s all rather epic really and a crescendo to the four movements of this symphony. To take the Tubular Bells analogy a bit further, there is a quiet moment after the main story has finished and then…..well, that would be telling (it’s not the sailors horn pipe though!)
A real epic spanning not only the centuries but the whole range of Big Finish’s Doctor Who worlds.  A great pilot for each of the series if you have not heard them (I will certainly be investigating the Vault) not perfect, but very good indeed.  I found the ending a little bit of a cheat, a variation on a theme that has become very over used in New Who on TV, but used in a slightly different way here.
Worth the entry fee? I would say so.  Welcome to my world, won’t you come on in because I give it 9/10.