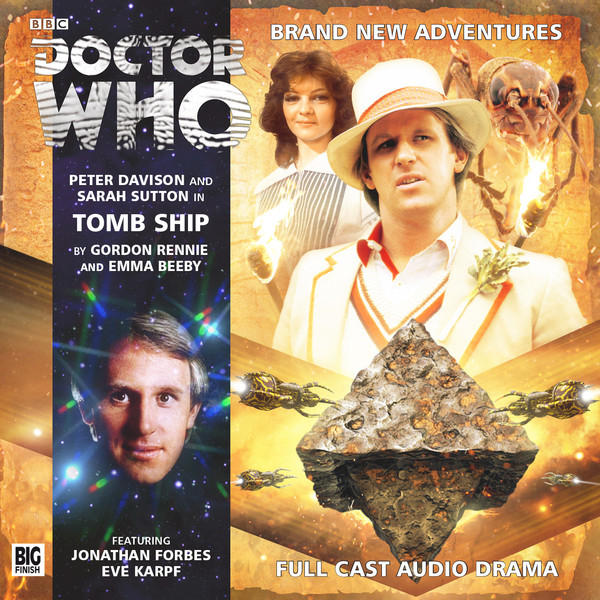 Any takers? Anyone? Well, it was of course the theme to Indiana Jones, which leads me nicely on to this months main range release from Big Finish – Tomb Ship, or as I like to think of it “Doctor Number Five and the Tomb Ship of Doom”. If Last of the Colophon was a pastiche of the Invisible man, then Tomb Ship is a definite homage to Indiana Jones or the Mummy or that type of high octane tomb raiding adventure.
The Doctor and Nyssa arrive on the Tomb Ship of the title, the Doctor realises where they are and promptly decides to leave, but unfortunately the TARDIS has disappeared and they are stuck in the tomb of the God King of Arritt.  Problem is, this is a Tomb Ship rigged with traps for the unwary, and rigged to explode with the force to become a star so that the God King can become immortal.
If this wasn’t bad enough, on board are a family of Tomb Raiders hoping to retrieve the God King’s treasure, with a sadistic mother Vima played by Eve Karpf, who will stop at nothing and sacrifice anybody to get to her goal.
So we have a nice little melting pot of disparate elements, Davison gives his usual “breathless enthusiasm” performance, Nyssa is earnest, Vima is vile and her sons are real mummy’s boys (pardon the pun) who will do anything for their mum and it should work, but doesn’t quite manage it. It’s almost like an elongated part four of Pyramids of Mars or the Rassilon’s Tomb section of The Five Doctors. I think the real problem is that this type of story is so visual, that it is difficult to pull off on audio, the threat, though there, just didn’t feel all that urgent to me. Actually the Five Doctors is a good comparison and has many parallels to the finale of the story, greed and ambition lead to their own punishment.
We also have the return of Hannah Bartholemew (from last months story Moonflesh) who looks like she may be joining the Fifth Doctor and Nyssa, at least for a while, think of a bluff Stephanie Cole type in her younger years and you won’t be far off the type of character she plays, all tweed and plummy voiced no nonsense upper class personified, she should shake up the dynamic on board the TARDIS.
Overall, an enjoyable enough story, maybe a bit long, and too much going on, I give it six crystal skulls out of ten.