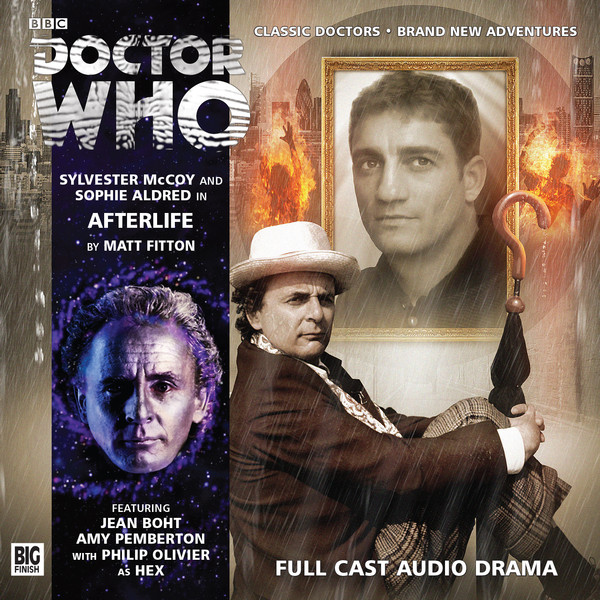 Missed one,  should have been back with the December 2013 lot, but its a great story so enjoy:

In the words of River Song – Spoliers, Sweetie! And I really do mean it. If you haven’t heard Gods and Monsters or the preceding arc (and if not why not, it’s spectacular) then read no further until you have.

Ok, are you all up to speed? Then I will begin.
Afterlife begins immediately where Gods and Monsters finished, Hex is dead, sacrificing himself to defeat Fenric, the first episode is pretty much a two hander with the Seventh Doctor and Ace, using a framing device of a letter found in Hex’s belongings written to his Nan but never posted and read from beyond the grave by Philip Olivier. McCoy and Aldred are on top form, Seven is the most remote and alien of all the Doctor’s and his meddling and failure have caused Hex’s death, he tries to contextualise for Ace, but it shows just how alien he is, he just can’t come to terms with Ace’s grief, and Ace has a fantastic, withering description of him: “you think you are god, but you are just a lonely little man”, which is really chilling and cold, but an accurate description of Seven after his failure. Ace needs closure, so she asks The Doctor to visit Holds, Hex’s Nan to deliver the news of his death, to do the decent thing.
It’s interesting to see the Doctor facing up to the consequences of his actions, Hex’s Nan is played by Jean Boht (Ma Boswell from Bread) who is quite frankly fantastic, she knows from the moment The Doctor arrives why he is there, but tries to avoid having to face it by withering on about tea and biscuits, and when the Doctor delivers the news she doesn’t let him off. He has arranged a memorial service, but just can’t speak and say the right words, it falls to sometime companion Sally Morgan to deliver a fitting eulogy. Whilst this is happening, Ace has become involved in a local turf war with rival gangs and their nightclubs, but SPOILERS again here so I won’t go into too much detail. It’s very much a story about loss, coping with bereavement and moving on and how different characters handle this.
I have to give a huge nod to Sylvester McCoy, in perhaps his best ever performance as The Doctor, he nails it so well, when a character asks him to “pity me” his response is “Fear Me” and then gives a speech about who he is and nails his colours to the mast in the equal of the “fire and ice and rage” speech in Family of Blood.
So is it any good? In one word, classic, not for the faint hearted other those new to the range, but the rewards for the long time listener are many, and a new arc is set up at the end, unreservedly 10/10
Posted by Blog Finish at 07:52