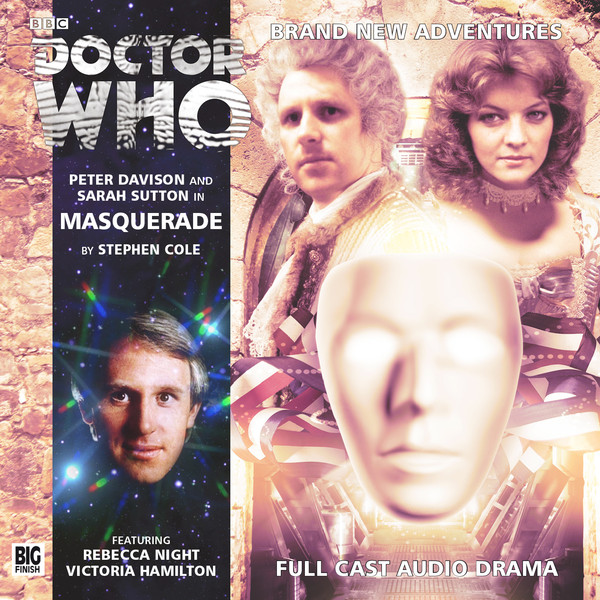 In the 1990′s there was a little known band called “The Family Cat”, I liked them, they had a great song called Steamroller.

How is this relevant you may ask dear reader, well, read on and be enlightened (or bored depending on whether you like my style or not!)
You see this rather great bit of 90′s indie rock could form the soundtrack to the latest offering in Big Finish’s main range – Masquerade, in fact I can imagine loads and loads of videos on You Tube made of clips had it been on TV with Steamroller as the soundtrack as the main protagonist is called “The Steamroller Man” I made my point in the end.
An odd title for an odd protagonist in an odd story, but odd in a good way if you will get my drift, and unfortunately it’s one of those stories that I really can’t say too much about as discussing beyond episode one will ruin the intricately written plot, and what a plot, mind bending or as my better half would say “a real head wrecker”.
It starts off with the Doctor, Nyssa and new companion Hannah Bartholomew arriving at a chateau in 18th century France, their memories have been altered, they think Nyssa is the Doctor’s ward and Hannah is her governess. They are all in period costume, the Doctor even has a powdered wig – nothing is as it seems, there is a dead man in the cellar talking about rats, mechanical noises that not everyone can hear and the impending threat of the Steamroller Man (go on, play the song again, you know you want to:-)) it did remind me slightly of a The Girl in the Fireplace due to setting and the Missing Adventure The Man In a The a Velvet Mask in tone, and this is all I can say without a big dollop of “Spoilers Sweetie”
Peter Davison gives his all as the Fifth Doctor, he is at his best in this one, a reasonable, intelligent man out of his depth, caught up in events, reacting rather than shaping them always one step away from blind panic and desperation, I wish we saw more of this side of him as I do like the Fifth Doctor’s fallibility. Francesca Hunt gives a star turn as new girl Hannah Bartholomew and Sarah Sutton is dependable as ever as Nyssa.
The story really dose feel of the era, with it’s one word title and sound design, I can just picture it as 80′s does pre-revolutionary France, re-using sets from a period drama the Beeb had just made, lit brightly.
A very good end to the “Hannah trilogy” and one of the best Peter Davison era stories full stop, gonna roll over you at 8/10.