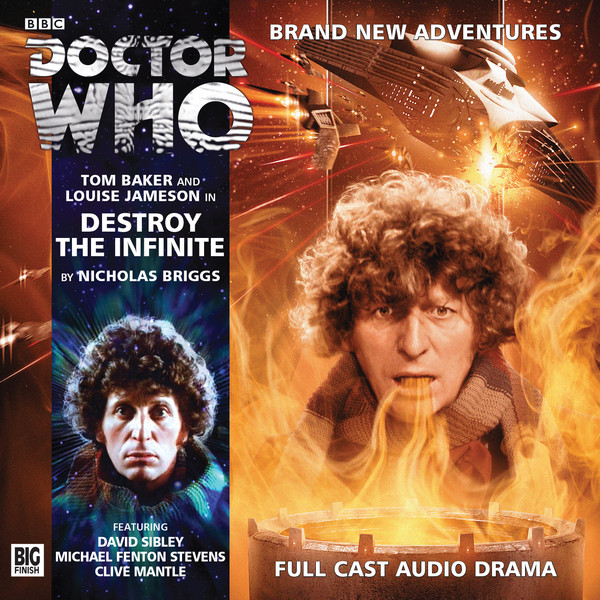 I have said it before, and no doubt I will say it again, but I absolutely LOVE Big Finish and stories like Destroy The Infinite are the reason why.

With a scope covering the first eight Doctors, they really can produce stories “too broad and deep for the small screen” (to quote Virgin Books circa 1991), but more than that, they can create epics that span the ages – just look at the last Seventh Doctor plot arc, seeded way back when and culminating in Gods and Monsters and the effects are still being felt.
So, Destroy the Infinite – to get some context on this, let’s take a look at the Sixth Doctor Story “The Seeds of War” Ol’ Sixie meets an old enemy called the Eminence, then Dark Eyes 2 – again the Eminence, this time met by the Eighth Doctor. But Destroy the Infinite is where the Eminence story begins and the really astounding thing is we have already witnessed so e of the fallout from this story with Doctor’s Six and Eight – not “timey-wimey” (yawn) just very clever story telling, like peeling away the layers of an onion, seeding something bigger and more epic and rewarding the long term listener.
As for plot it starts pretty much like any Fourth Doctor and Leela story in that he has taken Leela to visit a successful Earth colony so that she can learn about it, but the colony far from being idyllic has been occupied by the Infinite Warriors, soldiers of the Eminence. And what a villain the Eminence is, gaseous and appearing in a casket, once you breath it in, your skin begins to calcify, you lose all sense of who you were and you become an infinite Warrior. This happens at the beginning, before the Doctor arrives, and it is truly horrific, a loyal slave soldier being made to take “the breath of forever” it’s tragic, all he cares about is his family and the fact he will forget them.
This story could be a standard rebels against tyrannical rulers, but it is so much more – a true epic, Nick Briggs has written a classic homage not only to mid 70′s Who, but also to World War 2 films, and dare I say it, the Star Wars saga – all earnest young men, rebels, an incontrovertibly evil enemy, dog fights in space, plans that are a thousand to one but just might work, you get the picture!
And in the centre of this, standing like a mighty colossus is the mighty Tom Baker – at the top of his game as good, if not better than he ever was in TV, going from flippant to outraged to frightening to charming sometimes in one sentence – ably supported as ever by the wonderful Louise Jameson, surely one of the most skilled actresses we have been lucky to have on Who, and a guest cast featuring Michael Fenton-Stevens, Clive Mantle & David Sibley.
But there is always The Eminence – the antithesis of the Doctor, but part of him for his remaining regenerations due to events in this story – Nick Briggs has done something wonderful, he has changed the nature of the Doctor and how we view all stories since this one. In a way Destroy The Infinite was ground zero for the Doctor and how the rest if his life will pan out, far cleverer than adding an extra Doctor for the sake of a special – this truly is the long game and I for one can’t wait to see how the story unfolds.
Overall, an Eminently deserved 10/10.
Posted by Blog Finish at 07:47