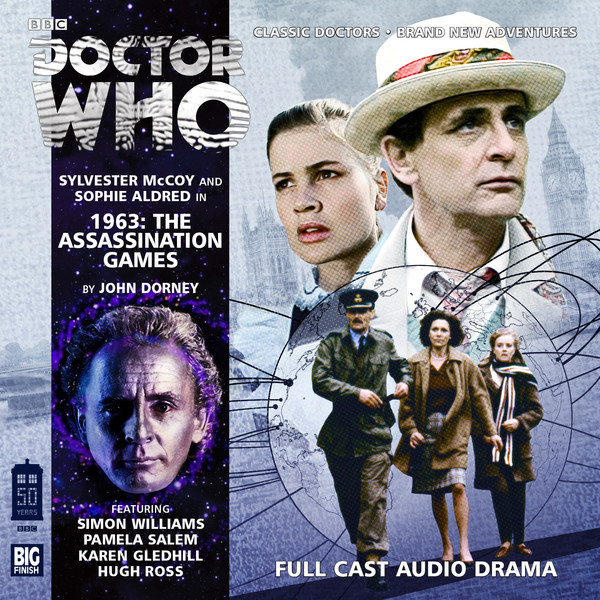 Atmosphere is very important in story-telling, it sets the scene, gives it a sense of time, place and tone, and the latest release from Big Finish 1963: The Assassination Games is literally dripping with atmosphere.

I was immediately transported back to the Britain of the era; echoes of the Profumo Scandal, the Cuban Missile Crisis, the Decline of Empire and the rise of CND ooze out of this audio drama.
It is into this background that the Seventh Doctor and Ace are placed, though in true Seventh Doctor style, they hardly appear in the first episode, having been in deep cover investigating for a while. The story also reintroduces us to the “Counter Measures” team headed by Group Captain Gilmore and ably assisted by Professor Rachel Jensen and Alison Williams, last seen in Remembrance of the Daleks, they are investigating the assassination of the Minister of Defence by an anti-nuclear extremist and also the developer of a new type of Nuclear weapon called Star Strike, Sir Gideon Vale. Atmosphere again, think Tinker, Tailor, Soldier, Spy and you won’t be far from the mark.
I make no secret that Sylvester McCoy is my favourite classic era Doctor, I love his almost god-like persona, his foreknowledge, his playing of games – and boy is he on form here, he has been playing this game a while, his cover being revealed is the cliffhanger to part one, he really is in the lion’s den and relishes that the other lions think he is their prey and can’t see that it really is the other way around. The story zips along at fast pace, lots of treachery and counter treachery and ends up dangling a new story arc for the Seventh Doctor and Ace…..
This is another winner from Big Finish, they are on a roll at the moment, a real purple patch and sees the whole cast on top form.
Overall 8/10