The English Way Of Death 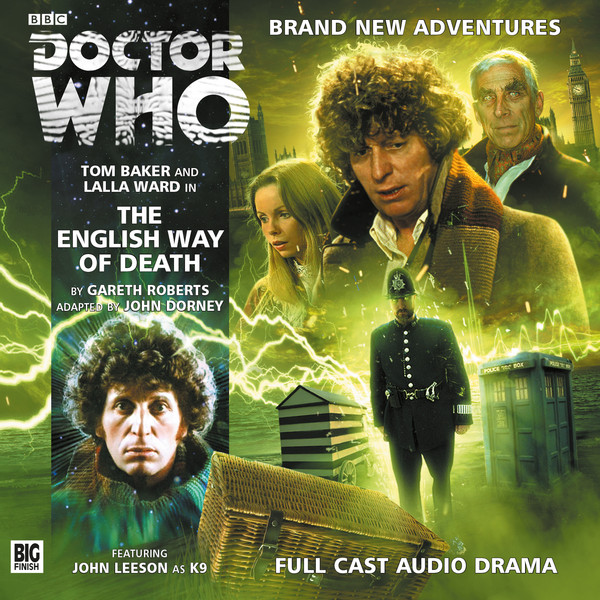 I do like a good pastiche (and also a nice pasty) and no one does a season 17 pastiche like Gareth Roberts; he is the Ginsters of Doctor Who in a manner of speaking.
To me, season 17 was the peak of the Tom Baker era. I love the sense of unrestrained silliness, the scope and ambition. I would take Tom’s goggling eyes when the TARDIS console explodes complete with comedy noises in Nimon over Pyramids of Mars any day – not to everyone’s taste I know but I rate madcap over morose on every count.
So, The English Way of Death, the recipe is something like this:
1.Take one part Adams, one part Williams
2.Add a dash of Tom and Lalla
3.Mix in a bit of 1930′s social comedy -  Mapp & Lucia or Jeeves & Wooster will do nicely
4.Liberally combine Zombie cliches
5.Filter through Gareth Roberts writing talents, novelise
6.Let it simmer for 20 years or so to gain legendary status
7.Pass on to Big Finish to adapt
8.Sit back, relax, enjoy.
As I said in my review of The Romance of Crime, Roberts really has hit in a winning formula, and The English Way of Death is no exception.
Set in the 1930′s, the Doctor just wants to return some overdue library books but he Romana and K9 get caught up in a plan to destroy the world. It’s an upper class world of colonels, bridge clubs, manners, appearances and “silly ass” upper class twits that we enter – straight from the worlds of P.G Wodehouse or E.F Benson and the Doctor fits in just fine.
It’s a complex plot, all to do with gaseous entity Zodaal, a sentient smell (no really) who wants a new permanent body. It can split its will and possess humans, hence the Zombies who in true to form cliche all want to eat brains!
Add to this people from the future who are using a time corridor to the 1930′s and joining the upper class; chief of these is Percy Closed – how he chose his name is a great joke, think Ford Prefect like in Adams Hitchhikers Guide. The cast are universally excellent, Tom steals it, he is zany, silly, funny but also the man everyone defers to. Terrance Hardiman is wonderfully arch as Stackhouse, the businessman possessed by Zodaal.
The whole thing is very visual, evocative of the time period in which it is set and reminiscent of the era in which Tom and Lalla were on screen. It’s  delightfully silly, very arch with really only one foot grounded in reality.  This is a cliched take on both 1930′s comedies of manners and Zombie movies but the tone makes it work. The cast seem to be having a whale of a time! In James Bond terms this is more Moonraker than Goldfinger, but me being me, I take the double taking pigeon any day.
Another triumph for Big Finish, maybe not quite as stratospheric as Romance of Crime, but a great romp and I rate it as 9/10.