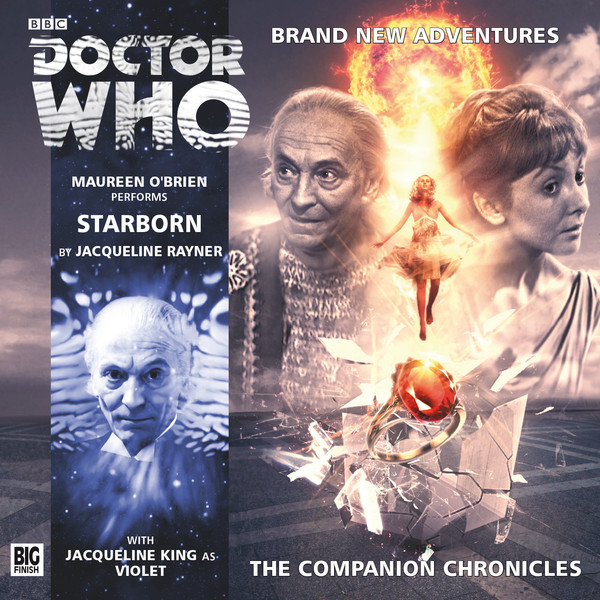 For the second month in a row, Companion Chronicles takes us back to the William Hartnell era, we are deep in Season Two, just after The Romans. The Doctor, Ian, Barbara and Vicki have been relaxing in early twentieth century London, having tea at a Lyons Corner House (which isn’t on a corner and doesn’t have any Lions, a running gag) when they help a medium called Madame Violet to get back home, Vicki becomes separated and unable to get back into the TARDIS, and Violet has a story to tell.

This is another two-hander, Maureen O’Brien plays Vicki, sounding amazingly just as she did in the sixties, and Madame Violet is played by Jacqueline King (Donna’s Mum from the TV series). Vicki does not believe in spirits and mediums, so Madame Violet attempts to prove her wrong.  She has someone who has a message for Vicki, and Vicki’s initial scepticism is soon worn away when Violet channels a future version of Vicki, but a version who has died on their very next adventure….
This is another oddball release, very small scale, but amazingly ambitious and dripping with melancholy and regret, it really is a sad little story, desperation runs through it as the future Vicki tries to convince her earlier self not to follow the path that leads to her doom. I was never a fan if Vicki in the TV series, but this story has gone a long way to rectifying that,  it actually feels like Big Finish have given her character a Nu-Who makeover, she is imbued with a depth and personality rarely seen in her on screen adventures.
As for the Starborn of the title, again they are a very sad and melancholy bunch, a society where people transform into stars to keep their society alive, again brimming with a sense of loss and longing. While the resolution could be taken straight from a Moffat era story, the character and emotion conveyed and the genuinely moving story makes it transcend the out of era gimmickry which could have spoiled the story.
To be moved by a Who story is a wonderful thing, but to be moved and made to reappraise a companion I had previously overlooked is praise indeed, and this story is deserving of praise. A small story, but with a big impact, a wonderful character piece that has stayed with me, and one of the very best companion chronicle releases.
Overall 9/10.