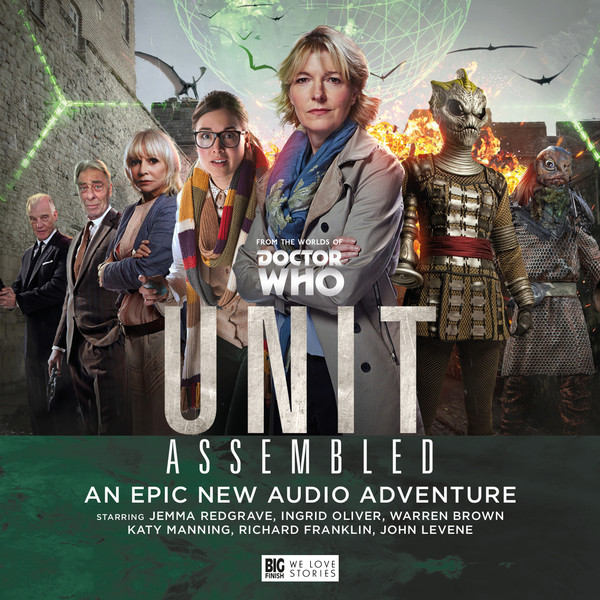 Nostalgia can be a wonderful thing. That wonderful warm glow you get whilst remembering “better times” that were probably no better or worse than now, but have become the stuff of legends because of the time that they happened, the person you were then and the people that were around you at the time. Ah the stuff of legends. The UNIT “family” are undoubtedly the stuff of legends holding sway over one of the most fondly remembered eras of “Classic” Doctor Who – The Third Doctor, The Brigadier, Jo Grant, Captain Yates & Sergeant Benton defending the world (or at least the home counties) from weekly invasions from Autons, Axons, Daleks, Chronovores and Giant Maggots. Just those words conjure up images of simpler, happier times, of Saturday evenings sound the TV with the family, of the three day week and power cuts and strikes….
But times change and so does UNIT, no longer the make do and mend outfit from the 1970’s (or was it the 1980’s….) UNIT are now an ultra modern, ultra efficient force headed by Kate Stewart (Jemma Redgrave) ally assisted by scientist Osgood (Ingrid Oliver) – but sometimes, just sometimes it is time to call the old guard out of retirement and this box set UNIT: Assembled is just one of those times.
Time has not been kind to the original UNIT family, we have lost Jon Pertwee and Nicholas Courtney, but this box set honours their memory in style and hearing Sergeant Benton (John Levene), Captain Yates (Richard Franklin) and Jo Jones (Grant) (Katy Manning) team up with the new boys and girls of UNIT should warm the cockles of even the most cynical “New Who” critic as UNIT old and new team up to battle a new threat from a particularly vicious and single minded bunch of Earth Reptile (Silurians in old money) with call backs a-plenty to their glory days in the 1970’s (or was it 1980’s

) the old guard fit right in with NU-UNIT and their story is told over four separate but connected episodes:
4.1 Call to Arms by Matt Fitton
“A roister-doister of a barnstormer of a beginning” is how I would describe this one, though it begins with an ending as Mr John Benton is retiring from the pub game, this is his last night as Landlord of his pub, he and his wife Marjorie are about to give it all up for a world cruise, friends have gathered, beer has flowed and tensions rise as old wounds are opened and THEN – Kate and OSgood turn up and the whole thing loses its rosy glow and becomes a tense base (or Pub) under siege that not everyone is going to get out alive from.  Featuring militant Silurians in the form of Jastrok (Richard Hope) and Kalana (Neve McIntosh) rousing the more right wing factions of their species against us uppity apes – UNIT old and new make their stand in Benton’s Pub. There is a genuine warmth to the performances from UNIT regulars John Levene & Richard Franklin as their characters go back to what they did best in the 1970’s (Or 1980’s – sorry its getting boring now

) make do and mend against an overwhelming force, but this time they have Kate and Osgood to help out. A fabulous beginning, completely visual and has the tension ramped all the way up to eleven – its great to see the old gang back together, well not quite as Jo is absent, but the next story makes up for that.
4.2 Tidal Wave by Guy Adams
What is there not to love about Katy Manning and her character Jo Jones? She is just fab, utterly fab and when Kate Stewart (Jemma Redgrave) meets up with her Jo is dong what she has dedicated the most of her life to, she is protesting against animal testing and use of chemicals by a faceless corporation – but Kate has a mission for her….
Jo and Osgood are a pairing made in heaven, Osgood (Ingrid Oliver) is a Jo Jones fangirl asking her all sorts of questions about her time with UNIT and the Doctor and their adventures almost like a fan at a convention, so it is fortunate for Osgood that she and Jo are charged by Kate to check out an environmentally friendly tidal power generator codenamed “Project Charybdis” and are bound for the sea bed – can you see where this is going yet….
Yes indeed we are about to meet up with our old friends The Sea Devils and find out that the Earth Reptiles are not a mono culture monster but a genuine species with different views and values as we humans have. Unfortunately with Jastrok on the march, he wants the Sea Devils biological weapons, hybrid monsters which he is going to unleash on the humans, but Jo sees that there is a peaceful solution to be had. Katy Manning shines in this one and is wonderful as Jo trying to be like The Doctor and achieve peace between the species. A steady episode that forward the plot and gives Jo a lot of character development.
4.3 Retrieval by Guy Adams
With Jo, Yates and Benton back at UNIT HQ in the Tower of London it falls to Kate and Osgood to follow up on leads to control the impending doom that the Silurians have unleashed, and they are lead to a Silurian nest in the Mediterranean, unfortunately they are not alone and the fanatical Silurian Tryska has other ideas for apes that do not know their place. After two almost euphoric episodes in which UNIT old and new team up, this is a different beast altogether. Darker and more dangerous with Kate And Osgood being pushed to their limits by the sadistic Tryska and her fear inducing device. A tense thriller that plays with the listeners expectations as Tryska torments our heroes. Slower paced but no less of a scale than episodes one and two – a slow burner.
4.4 United by Matt Fitton
And finally the gangs all here – London has fallen to Jastrok and his hordes, the UK is cut off by air and sea by prehistoric monsters (no not UKIP

) and UNIT are told the terms of surrender by Jastrok. The Silurians have won, the human race will be slaves or have their minds destroyed be fear. We have lost. Until UNIT say NO – united they stand, maybe for the last time. An epic end to an epic box set – high on adventure, high on action, high on scientific impossibility, as Alan Partridge might say “lovely stuff”.
That was immense fun, it felt in parts like UNIT’s greatest hits but as a nostalgia piece it ticked all the right boxes and had some genuine “punch the air” moments – fast paced like an action movie with very few small character moments, but when they do come the light and shade they add to the proceedings are all the more pronounced. Katy Manning is as superb as ever and totally adorable as Jo, Yates’ keeps his head and John Levene as Benton gets all the best comedy lines – just as it should be while the new guys are duly reverent to those that have seen it all before, the old guard don’t feel like token nostalgia, they feel like the victory would have been impossible without them. A lovely box set and a well deserved 9/10.