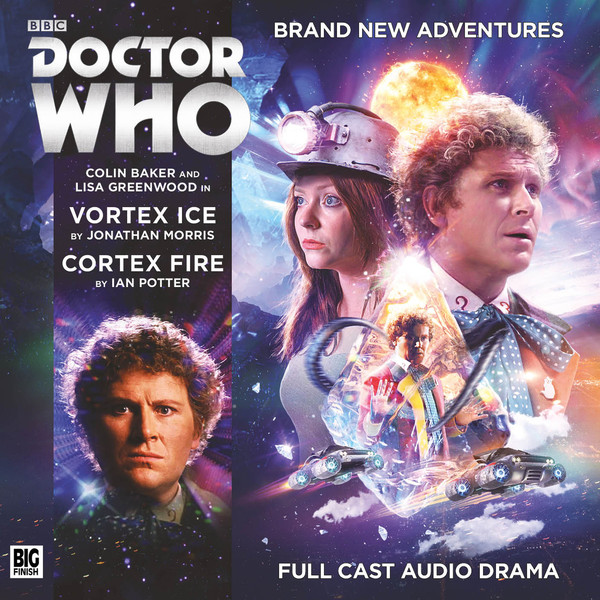 OK, so you have the “double bills” trilogy, one double bill featuring Doctor’s Five, Six and Seven respectively. You begin the trilogy with a Fifth Doctor pairing an old fashioned very trad story and a more experimental story. How then do you approach Old Sixie? How do you do something new and exciting and take him into new frontiers with this new format? Big Finish have not taken the easy route and here they have gone very “cinematic” if that is the correct word, two relatively short stories with huge imagination, huge ambition and huge scope, by that I mean these are stories have impact on the Doctor (Colin Baker) and Flip (Lisa Greenwood).
Everything oozes class and polish, the sound design is perfect, the sense of urgency and the impact that the characters have on the events is has an importance brought to the fore that is sometimes lacking and unlike last months releases these two stories do not have an obvious link but share certain thematic similarities regarding fatalism and time. Yes our old friend time. Regular readers of my ramblings will know I am not a fan at all of the “timey-wimey” style of storytelling, if there is one thing I don’t like it is a “cheat” ending. The first of these stories “Vortex Ice” is a time travel based story, but not an obvious one and not an obvious story to blow me away. But it did….
Vortex Ice by Jonathan Morris
What starts and ends in a cave in Mexico? Short answer is Vortex Ice does. The route it takes to get there however is a very very long one involving lots of death, explosions, A cybernetic octopus and a rather fatalistic and real approach to the hazards of time travel. If I say too much I will spoil the story but suffice to say that Vortex Ice requires multiple listens to appreciate the complexities of the story telling – not in the “look how clever I am “ style the TV series sometimes has but a to notice how all the pieces of this aural jigsaw fit together so perfectly. The nearest big screen comparison I can think of is the film “Memento” ( if you have not seen it it is well worth a few hours of your time) as it has the same puzzle mentality with layers being peeled away as the listener (in the case of Vortex Ice) gets drawn deeper in to the proceedings. It is (On first listen) a very confusing story, things seem to happen for no apparent reason (they don’t there is a reason) and when you get to that critical mass of information point and penny drops as to what you have just been listening to you will feel rewarded. The star of this story is undoubtedly Lisa Greenwood as Flip Jackson who has really come in to her own as Old Sixie’s companion and the only little hint I will give you is “follow Flip”. This is a wonderful way to spend an hour of your time, the story falls fully formed and does not need to be longer than two parts it just works as it is. It needs active listening and demands a lot from the listener but is an immensely rewarding listen.
Cortex Fire by Ian Potter
Thematically if not literally following Vortex Ice is the second of the double bill – Cortex Fire. On the surface a far more traditional Doctor Who story. Under the surface it is nothing of the sort. Arriving on the planet Festin the Doctor has brought Flip to see the Opera and a cosmic light show that will put the Aurora Borealis to shame but are soon caught up in a race to save every man woman and child on Festin from a collective “Urge” to die facilitated by the all powerful computer The Cortex. Fatalism again counterpointed by the enthusiasm and urge to live that the Doctor and Flip bring to the party. So dressed up as a traditional Who story we are shown a Blade Runner-esque world (complete with corresponding Vangelis-like soundtrack) in which the populace are living in fear of terrorists known as “nihilists” who are being blamed for the wave of spontaneous combustion. But the truth is far more terrible and the culture of the planet has a lot to answer for….
It ought to be a very depressing listen but it really isn’t and this is down to the way that the story is presented – a society who’s culture and heritage leads the population to unconsciously want to die is a huge concept and is handled very well in the short running time of the story – and then there is the way that The Doctor (inevitably) saves the day and the sacrifice that he makes – the final scene between Old Sixie and Flip as they discuss how long he has really been away is genuinely moving.
An excellent double bill that will have something for everyone and a lot more if you want to delve a bit deeper under the skin of the story. I like a story that makes me think and these two have given me ample food for thought and a lot of enjoyment. I think these are stories I will be revisiting again in the near future and I think I will hear something fresh and new on my relisten. Fatalism, Frost & Fire all add up to a well deserved 10/10.