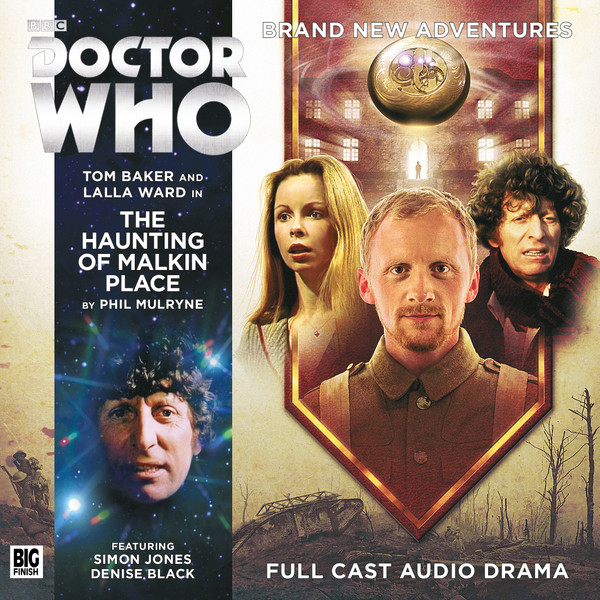 Question: what looks like 1980 but feels like 1975?
Answer: The Haunting of Malkin Place.
Put simply – the cover tells us this is a 1980 story – Burgundy coat for Tom, star field round his face, Romana the second by his side, but absolutely EVERYTHING else screams HINCHCLIFFE. The setting, the sound design, the plotting. There isn’t a Bidmeadian innovation apparent, not charged vacuum emboitmments, no creeping entropy, no chronic hysteresis, just a darned good spooky yarn.
We catch up with the Doctor (Tom Baker) and Romana (Lalla Ward) relaxing at the Doctor’s house on Baker Street and an ensuing discussion regarding the novel The Turn of the Screw coupled with a noise in the attic which the Doctor has been warned NOT to investigate at any cost leads them to try and track down the author M R James and discuss his character motivation in The Turn of the Screw. “Another celebrity historical” was my first thought, but The Haunting of Malkin Place is nothing of the sort, The Doctor and Romana don’t get to meet M R James at all but are drawn in to a real life haunting.
Set in 1922 with Britain still in shock from the human tragedy that was World War One Maurice (Gunnar Cauthery) and his sister Beatrice (Fiona Sheehan) have inherited Malkin Place from their recently departed father and are suffering hauntings – children cry doors slam, crockery breaks and on top of all of this Maurice is riddled with survivors guilt from his time in the trenches of France in the war. The Doctor and Romana meet with Spiritualist Talbot (Simon Jones) and his young ward Tom (Rikki Lawton) who has been called in by Beatrice to try to exorcise the ghosts of Malkin Place and decide that that is a much more interesting prospect than meeting M R James and decide to accompany them.
What follows is text book ghost story – seances, unexplained noises, people disappearing, flying objects and a secret that is revealed to be the key to the goings on in Malkin Place.
Lalla Ward as Romana is deliciously offhand and haughty at the mere prospect of the though of ghosts being real whilst Simon Jones as Talbot is genuine in his calling as a spiritualist, but it is the scenes between The Doctor and Maurice that really steal the show adding an emotional depth and maturity to the story, giving the setting the respect and gravitas it deserves whilst simultaneously adding to and resolving the plot. If this story is about anything then it is about letting go and grief and being allowed to grieve – a deep story dressed up as a ghost story with all the actors taking their roles seriously and nobody (not even Tom) “giving a turn” (although having said that the fourth Doctor with a moustache would be a sight to behold

)
It is fitting in many ways that the main resolution of the story reflects the story itself – something not quite of its time but something rather special, an excellent addition to the Fourth Doctor range and a well deserved 9/10.
Posted by Blog Finish at 19:37