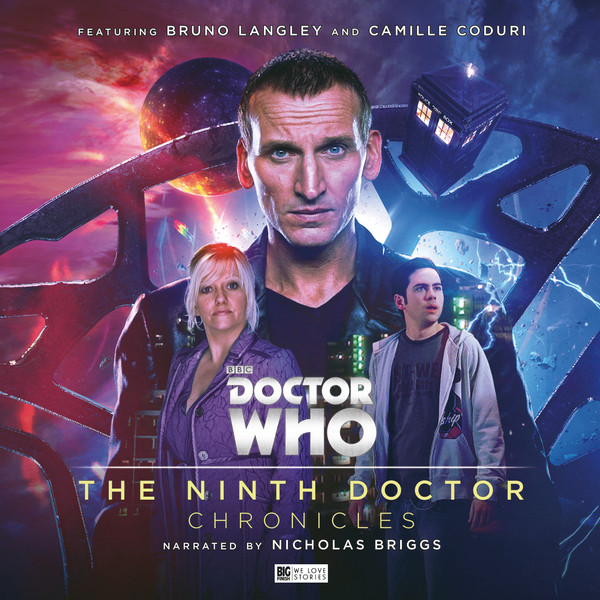 How do you tell do you tell a Ninth Doctor story without the man that brought the Ninth Doctor to life? There are two possible answers to this question. the firs is “you don’t” the second is you get Nick Briggs to narrate the part, because Mr Briggs gives good Eccleston. Not an impersonation as such but a capturing of the essence of the character all his sadness his flashes of joy at the smallest things because this was a Doctor looking for a reason to carry on, for a meaning to make everything matter again – and he found it in one Rose Tyler.
2005 were heady times, Doctor Who was back, the same show we had always loved but a little bit more emotionally mature, with better characterisation and with the man himself Christopher Eccleston. It cannot be understated how much of a factor in the success of “Nu-Who” Eccleston was – he took the character of the Doctor, stripped away all the extraneous nonsense – the scarves, the question marks, the celery etc and played The Doctor, and what a tour de force performance. For thirteen short weeks he was the man, and this box set revisits those days of Nine and Rose and Jackie and Adam and celebrity historicals and Mickey and (well you get the drift).
So no Mr Eccleston reprising the role (boo!) but a “Fantastic” Mr Briggs capturing his very soul in the performance he gives (yay) and these four stories really do capture the spirit of 2005. Not conventional full cast pieces, more in the style of Companion Chronicles where Nick Briggs narrates with one other guest actor playing the part of a principal character in the proceedings each of them touch on a specific theme from the all too brief Ninth Doctor era, loss and regret for the Time War, Celebrity Historical, the Rose/Doctor relationship and contemporary earth on the Powell estate, so lets begin with the first story:
1. The Bleeding Heart by Cavan Scott
A reoccurring theme for the Ninth Doctor era was his quest for inner peace after the atrocities of the Time War and where better to begin his quest than Galen, the renowned “planet of peace”. This is a story set prior to the events of Rose with a battle scarred Doctor becoming involved in a peace initiative between two warring races, but unfortunately death is the Doctor’s constant companion and the delegates to the conference begin to be picked off, murdered horribly – Can the Doctor ever escape the horrors of the Time War and the weapons that were forged in that terrible conflict. We see a Doctor desperate to be good again, he even has a one off companion in the guise of journalist Adriana Jardsel (Claire Wyatt) who sees him for the man he is. Its a bleak beginning, or perhaps it is an ending and the gateway to a new future for Number Nine.
2. The Window on the Moor by Una McCormack
And now we are in the Eccleston era proper with an celebrity historical – the celebrity in this case is Emily Bronte (Laura Riseborough) who has viewed the “window on the moor” of the title since she was a child and helps those that pass through to find other windows. Set on two worlds on the other side of portals opened by a mad usurper – The Doctor and Rose become embroiled in a civil war set in a world of glass prisons  - the armies are using the windows as a short cut between different parts of the reality but could the story of a usurped leader and his fiancee be the inspiration for Emily Bronte’s Withering Heights? Rose has heard the song but not read the book – The Doctor is appalled

Very “2005” in its sensibilities, the story is fast paced and has an emotional heart and has the “love conquers all” vibe that the new series was proud to wear as a badge of honour.
3. The Other Side by Scott Handcock
Adam is Davros! screamed the chatrooms and forums of 2005 (also Norman Lovett was playing Davros – he wasnt and he didn’t) But Adam Mitchell (Bruno Langley of Todd Grimshaw fame) was a second companion for a very short time of the Ninth Doctor and this story takes place right after “Dalek”. The Doctor is trying to get Adam home but ends up in an abandoned cinema. In Birmingham. A cinema that is host to a phenomenon that is slowly eating the cinema – a temporal tsunami is happening and with the Doctor trapped in late Victorian times and Rose Tyler trapped in the 1920’s it is up to Adam Mitchell to prove his worth as part of team TARDIS 2005! Fast paced, urgent and having all the things that the Eccleston era is remembered for – the bond between Nine and Rose, time war guilt, a contemporary setting – this story hits the ground running and doesn’t give up. There is a truly “cold shivers” moment when Nine & Rose finally meet up again in the 1920’s after a temporal phone call and Bruno Langley shows us what Adam might have been capable of if he had been allowed more screen time. Highlight of the set? I think so.
4. Retail Therapy by James Goss
How can you have a Ninth Doctor set without the unmissable Jackie Tyler. Short answer is “you can’t” even better when the wonderful Camille Coduri reprises her role in a tale of a pyramid scheme that is literally draining the life away from the residents of the Powell estate and other similar housing projects. You see Jackie Tyler has made a success of herself, she is one of the top seller of “Glubby Glubs” the latest craze (and a steal at only £19.99) pick one up and stroke it and all your troubles sort of fade away, they give you good nights sleep and are even making Jackie look younger. The Doctor isn’t impressed, he thinks Jackie has inadvertently launched an alien invasion from her living room, but Jackie is only interested in her profit and buying a villa in Spain….
Peel away the almost camp exterior and this is quite a nasty little thriller, a parable of capitalism draining the life from consumers, who then want to buy more which then drains them some more and so on and so on. You have to LOVE Camille Coduri who slips back in to the role of Jackie as if it was still 2005.
A lovely box set that makes me feel all nostalgic (cant believe the noughties arena nostalgia) and lovingly recreates and expands on the beginnings of the rebirth of a TV legend. Cant praise Nick Briggs enough both for his narrations and his extraordinary Eccleston and I really hope we get some more either in box sets like this or as Short Trips.
Not perfect, some of the stories are rather long, but a great listen and whilst not quite a Nine, a very good 8/10.