DARK SHADOWS - DREAMS OF LONG AGO 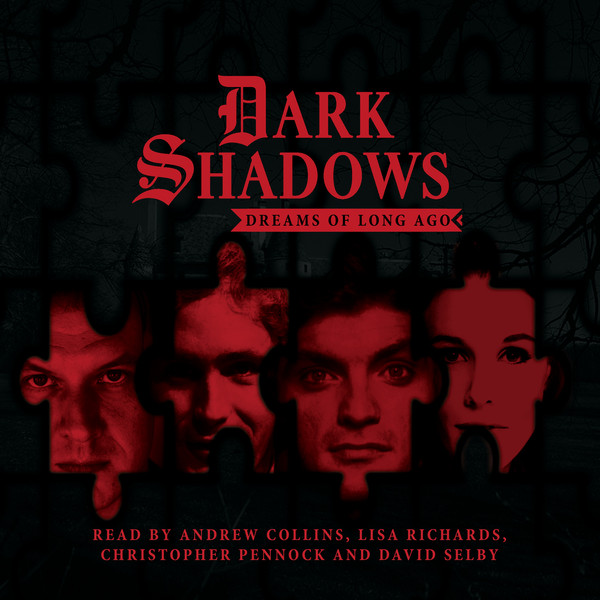 Dark Shadows has, as I have stated on several occasions an Autumnal feel about it. something of the loss of innocence, the world becoming just that little colder and darker. Something that makes you want to get to the safety of your own home and to be with your loved ones and hold them just that little bit closer and the title of the latest Dark Shadows anthology “Dreams of Long Ago” does nothing to dispel that feeling, it enhances it and creates an anticipation of lost loves, missed opportunities and lives wasted. And if that is what you are expecting then you will not be disappointed.
This release is a slow burner, very character based and very intimate as we get insights into the lives of four protagonists – Sabrina Jennings, Quentin Collins, Barnabas Collins and Sebastian Shaw. All the stories are stand alone, they take place in different places at different times but the ambiance of each individual story knit together very well making this feel like a cohesive set of tales that really do belong together.
The Reflected Man by Alan Ronald
Sabrina Jennings has lost everything, she works as a waitress in New York and exists from day to day mourning the loss of her husband Chris. And then she catches a reflection in a train windows and sees something in her mirror. But is this all just wishful thinking or is it the closure she has been denied? This being Dark Shadow it really could be either. Lisa Richards paints a picture in words of a cold grey New York and a desperate woman in Sabrina Jennings – the story really is a study in grief and much more powerful for being a personal account and not a full cast drama. A strong beginning.
Old Acquaintance by Matthew Waterhouse
Yes it is THAT Matthew Waterhouse (of Adric fame if you don’t already know) who has penned this one, a Quentin Collins story set on a cold New Years Eve in Collinsport where the Collins family decide to go for a quiet drink at the Blue Whale. Surely that isn’t much to ask? In the world of Dark Shadows it seems it is as Quentin is haunted by the memories of a New Years Eve he spent in Wales during World War 1, where he was introduced to the myth of the Mari Lwyd (the “Grey Mare”), because legends and traditions don’t get forgotten, they get lost until they are needed again, and on the cusp of 1972 The Mari Lwyd has come back for Quentin…..
Almost a story within a story as just as the Mari Lwyd appears in Collinsport we are transported back in Quentin’s memory to Wales. As a child in school I learned of the myth of Mari Lwyd so its lovely to have Welsh myths and legends mined for Dark Shadows and done to such creepy effect by the writing of Matthew Waterhouse and the performance of David Selby.
Devil’s Rock by Kate Webster
Possibly, no actually, the most straightforward tale in the set, this has a definite beginning middle and end and tells of Barnabas Collins and his servant Willie Loomis on a voyage to Jaipur to meet up with Dr Julia Hoffman – but things don’t always go to plan and Willie’s streak of decency in wanting to bury a corpse they come across on the Devil’s Rock leads to disaster. Andrew Collins reads this story about a fishing village with a secret. The story is quite predictable but is very pacy. Perhaps a little too straightforward and lacking the depth of the other stories in the collection this still has a melancholic feeling, it feels like this is the end of Willie Loomis devotion to Barnabas and that the actual story is just a backdrop for this.
Cobwebs by Aaron Lamont
This is a very very different story, even by Dark Shadows standards – its almost like listening to a waking nightmare. Sebastian Shaw is an inmate at Windcliff Sanitarium. But he is alone, no Doctors, no Nurses just his own room and a Spider spinning away in the corner. Is he awake or is he asleep, is he dreaming of this hell or is it really happening to him? And is there a way out? There is nothing more frightening than having your grasp on reality challenged, and that is what Sebastian is suffering in Windcliff – but he really isn’t sure what form that his reality takes, so maybe he just better listen to the Spider on his wall who will make everything alright. What harm can it do? An ambiguous, challenging and tough listen and a very good piece of acting and sound design end this set on a gruesome high.
A mood piece if ever there was one, Dreams of Long Ago gets under the skin (especially Cobwebs) and paints pictures of longing and loss and myth and murder. Another great Dark Shadows release and a well deserved 8/10.
Posted by Blog Finish at 19:33