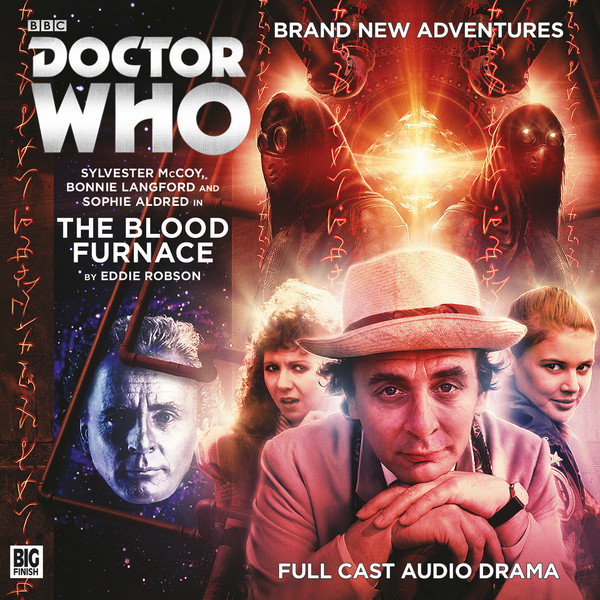 Only in Doctor Who could you get a story that begins with the gritty Scouse social realism of if not The Boys from the Blackstuff then definitely Brookside and ends with a battle involving intergalactic wizards using blood control and piloting flying ships. Endless possibilities, infinitely variable format check and check

This is an interestingly schizophrenic story careering from New Adventures style grit to panto style OTT cackling villains, sometimes in the same scene – Julie Graham as Carolyn is obviously having a whale of a time, not just chewing the scenery but cooking in a pre-heated oven for several hours. But what is this story about?
Arriving in a Liverpool Shipyard in 1991 The Seventh Doctor (Sylvester McCoy) Ace (Sophie Aldred) and Mel (Bonnie Langford) discover a dead body and are soon caught up in the investigation, the shipyard is owned by Stuart Dale (Todd Heppenstall) an ex University boyfriend of Mel who has developed a process to create an almost magical metal called Dark Alloy, he has rescued the shipyard from almost bankruptcy and kept local men in jobs – capitalism and social responsibility about 10 years before it was fashionable – but when something appears too good to be true it usually is but is Stuart in on the game or is he just an innocent bystander or is he willingly blind? All these questions and many more will be answered over the four episodes of the story.
But just how does the story go from murder in a Merseyside shipyard to alien mages, blood sacrifices and flying ships? By stealth is the answer because I for one could not see the join, the story flowed from one emphasis to the other and it was impossible to see the joins, it just seemed a natural progression from one to the other that is how well the narrative fits, like blood sacrificing alien mages were a natural part of 1990’s Liverpool (which they weren’t) – it also swings very well from dark to camp without it feeling jarring or forced, its just one of those stories you just have to go with.
McCoy, Aldred and Langford make an engaging TARDIS team with Bonnie particularly coming in for praise – she has completely thrown off the shackles of her TV persona and made Mel a real person with real motivations and not just a computer programmer from Pease Pottage and not much else. As I said before Julie Graham steals every scene she is in giving a performance worthy of the great Sir Brian of Blessed – but even all the camp over the topness of her performance does not feel out of place with the rest of the story – to misquote Sir Brian from Blackadder “this story has been as twere a mighty stew” and thats exactly what it is – lots of disparate styles and stories thrown together, they shouldn’t really work but somehow through the gravy of the writing and continuity and sound design seem to gel together rather nicely and give us a rip roaring adventure yarn as well as an introspective Seventh Doctor outing. Lovely stuff 8/10.
Posted by Blog Finish at 20:12