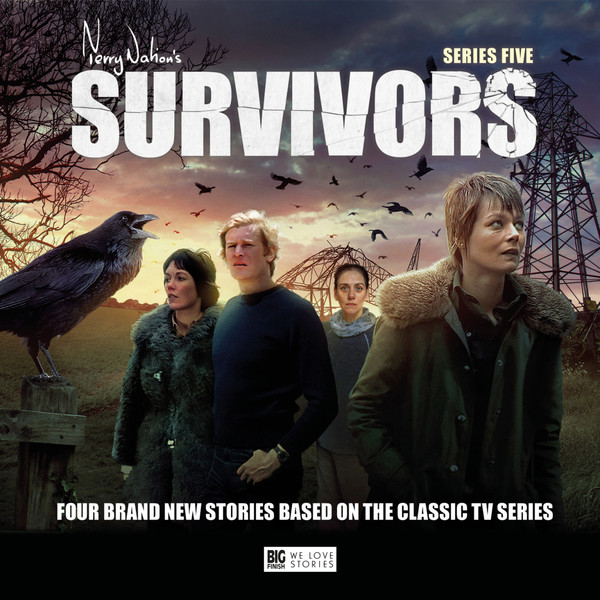 This is the story of Carol Baker. Nothing more, nothing less, its the story of one woman. Yes there are other characters and no she's not in all of the story but her shadow is long over the proceedings - Carol Baker is the catalyst, the reason that everything that happens in these four dark and harrowing tales that make up Survivors Series 5. Survivors has long been established as a groundbreaking drama - a terrifying vision of a world with no laws, where the law of the jungle has taken over and where civilisation has fallen. A stark, bleak world with no hope, a world of fear and suspicion, but, and it is a big but - there is a glimmer of hope - people like Greg Preston (Ian McCulloch) & Jenny (Lucy Fleming) are in the early stages of building a federation - a trading network between the new communities that have sprung up since 99% of the worlds population died from the plague. A new society is springing up from the ruins of our civilisation - surely nothing can stop the inevitable rise of the true spirit of humanity?

This is where we find ourselves in series 5 - a fledgling society, hanging by a thread - a brave new world there for the taking and then we visit the community of Maythorne and everything starts to come apart because Maythorne is where we meet Carol Baker. Theres that name again so lets find out a little more about her. Before the “death” Carol was an army medic and now she is the default Doctor at the Maythorne community - Carol is a believable and “real” character and is beautifully written and those words are brought to life by Neve McIntosh - giving Carol traits that are abhorrent and frightening and also a vulnerability and a pathetic desperation - this woman has nowhere to turn, no one she can turn to and has a fate which is pretty much sealed from the first part of this story - but the journey she takes and the journey of those who's lives she touches are drawn in blood and sweat and suffering, in fear and anger and even in love. This is a box set that will stay with the listener for a very very long time.

5.1 The Second Coming by Andrew Smith

Maythorne is where it all begins and where we meet Carol Baker for the first time, she and Abby Grant (Carolyn Seymour) are out foraging and are captured by bandits led by Healy (Sean Biggerstaff) This is the beginning of a chain of events that will bring devastation to the new society being forged - because people were not the only Survivors, the plague has survived as well, a new strain of the plague, more virulent than last time and with no antibiotics to combat it - Maythorne is just the beginning. As opening episodes go this sets the tone perfectly for the rest of the set. Its slow paced and deliberate and builds up the character of Carol as the layers of secrecy are peeled away and her awful secret that will bring so much suffering are revealed and then, when she seems almost pitiable when the listener wants to reach out and help her, her true nature, or to be more accurate the true nature of her desperation are revealed. Shocking and moving with awful repercussions Survivors has been to some dark places, but this is one of the darkest.

Greg & Jenny visit the neighbouring community to their home at Whitecross - the community of Springton is having a good natured border dispute with Whitecross over hunting rights and Greg is going to speak to the Council. The people of Springton led by Silas Broome (Richard Hope) have embraced paganism - Stone circles, animal sacrifice - like something from the Wicker Man. The old gods protect their community - but when a certain Carol Baker arrives death follows her and the old gods seems to have abandoned Springton. What follows is a grim and desperate race against time Greg and Jenny are in genuine danger, Jenny’s fear is real, Greg is out of his depth. Barbarism masquerading as religion from people who have lost and are losing again to the new “death” that is spreading like wildfire. Bleak, genuinely downbeat but a drama unlike any other.

5.3 Angel of Death by Simon Clark

Abby Grant is making her way from community to community to warn people of the new “death” - meanwhile Greg and Jenny hear of a community that has an electricity generator so go to set up a dialogue and meets Pearl (Donna Berlin) who is trying to get the generator working. Meanwhile Jenny hears a story of an “Angel of Death” that has been moving from community to community infecting people with the new plague - and she has visited this community, and it is not long before the plague is raging. Survivors has never been so desperate - every life lost is another nail in the coffin of the human race - the fledgling society is crumbling before our eyes and this is down to one woman, a woman we know as Carol Baker, a woman known and spoken of in fear as the Angel of Death….

5.4 Come the Horsemen by Andrew Smith

And so it ends. It has to, society has to survive. It deserves to. What doesn't kill makes us stronger but at what price? As Abby Grant and Evelyn Piper (Zoe Tapper) continue the search for Abby’s son Peter, Greg and Jenny are faced with an almost impossible choice as our story leads us full circle back to Maythorne. Retribution is coming for the Angel of Death, retribution in the form of horsemen with murderous intent. A difficult listen, a very difficult listen and completely morally ambiguous, do we hate Carol, do we pity her, do we agree with the horsemen? It is up to the listener - but whatever you think the ending will stay with you a long time after the closing credits.

All the best box sets work on many levels and this is one of the best - its a morality tale, its a broken mirror to the world we live in, its a character study, its a battle of humanity against the virus but more than anything this is the story of Carol Baker. A tale of despair, a tale of hope and a tale of the spirit of humanity both good and bad - and its another classic 10/10.

This title was released in November 2016. It will be exclusively available to buy from the BF website until December 31st 2016, and on general sale after this date.
It begins with just a few people falling ill. Another flu virus that spreads around the globe. And then the reports begin that people are dying…
When most of the world's population is wiped out, a handful of survivors are left to pick up the pieces.
Cities become graveyards. Technology becomes largely obsolete. Mankind must start again. But viruses are survivors too...
5.1 The Second Coming by Andrew Smith
Millions died when the plague swept the globe. Such a thing couldn’t possibly happen again - or could it?
When Abby Grant and Evelyn Piper both arrive at Carol Baker’s Maythorne community, a chain of events is set in motion that could unleash a new wave of death across the country.
5.2 New Blood by Christopher Hatherall
Danger surrounds Whitecross when a simple border dispute exposes deadly tensions between those who live side by side.
Greg Preston and Jenny Richards soon find themselves fighting for their lives, as people in the grip of a terrible new fear turn to the old ways to protect themselves...
5.3 Angel of Death by Simon Clark
Emerging from a quarantined Whitecross, Greg and Jenny discover that the danger they glimpsed at Springton is far from over.
Meanwhile, as isolated communities find themselves exposed to a disease they know nothing about, Abby joins a desperate race to save lives.
5.4 Come the Horsemen by Andrew Smith
In times of crisis, rumour and fear run rife across the decimated landscape of Britain. Evelyn and Abby experience the lethal effects of this panic first hand.
At such times the worst of humanity is exposed. Can Greg and Jenny find the best in those around them? Or is there no way to avoid the coming of the horsemen?
NOTE: Survivors contains adult material and is not suitable for younger listeners.
Written By: Andrew Smith, Christopher Hatherall and Simon Clark
Directed By: Ken Bentley

BUY YOUR COPY HERE
Posted by Blog Finish at 22:02