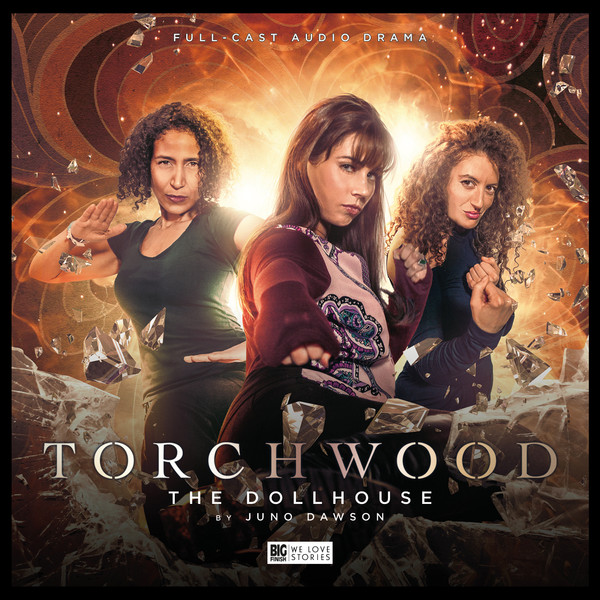 Question: Can I write this review without mentioning 1970’s camp cop show Charlie’s Angels? Answer: seeing as I just have the answer is a great big NO

Because The Dollhouse wears its influences not only on its sleeve, but has printed t-shirts and matching mug & coaster sets – this is Torchwood Los Angeles in the 1970’s, this is Torchwood going Disco and its a brave move too as no cast members that we know appear, this is Torchwood in the last outpost of the British Empire (in L.A of all places) fighting the future in platform heels and Farrah flicks.
So back to the influences – we are introduced Charlie’s Angels style to our heroes Marlow Sweet (Lalla Pyne), Charley Du Bujeau (Kelly-Anne Lyons) and Gabi Martinez (Ajjaz Awad) and their disembodied voice of a boss Mr Beamish (Guy Adams) and we get a very disco iteration of the opening titles – so far, so camp, close your eyes and you really can visualise this as a prime time TV show in the 1970’s with bad stunt doubles, worse editing and a groovy soundtrack – and that would be the easy route, Dollhouse doesn’t take the easy route, and having been lulled in to a false sense of what the world we are about to enter is like it suddenly changes and becomes more real, darker, dangerous and sleazy.
Young aspiring actresses are going missing and there trail leads the ladies of Torchwood to one Don Donohue (Stuart Milligan) theatrical agent and all round flesh crawlingly creepy slime-ball, as Marlow Sweet gods undercover as an office temp, Gabi & then Charley use all their feminine wiles to find out if he is the link and to find out exactly what “The Dollhouse” is.
Camp would have been the easy way, but this pulls no punches and is a much more realistic depiction of L.A in the 1970’s, the racism, the sexism, the male dominated corruption is all laid out – women are (literally) seen as a commodity by Donohue and his allies – the world these characters inhabit is glitzy on the surface but delve a little beneath and it is cold, cruel, charmless and dangerous.
The story moves along at quite a pace, has some great voice acting and incidental music and leaves the door open for further escapades for Torchwood L.A, because these ladies are needed to protect L.A not only from alien threats but from the worst of humanity that see alien threats as an opportunity.
The Dollhouse is a hard edged, hard boiled tale dressed up in spangly disco gear – if Big Finish were pitching a new series then this is a more than worthy pilot – an angelic 8/10.