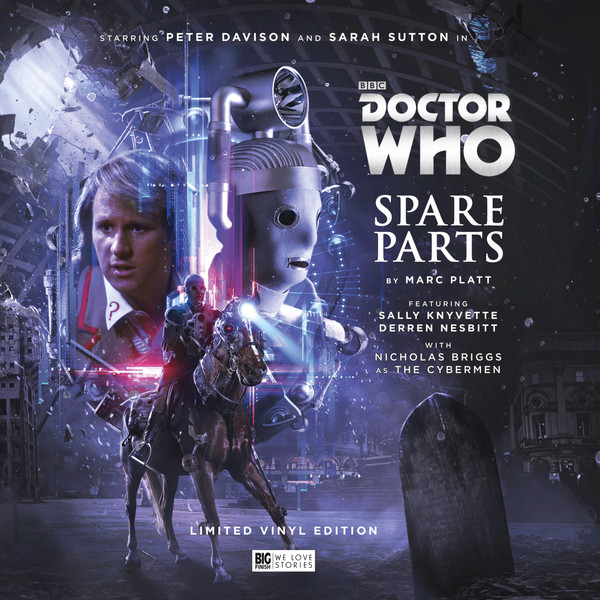 There has never been a Doctor Who story quite like this, not before, not since. And it is very easy to see why it is a firm fan favourite and by extension a candidate for a very special Vinyl release – this story is unique. It could quite easily have been a derivative of “Genesis of the Daleks” and I am sure it would have been very exciting – but Spare Parts is  different and over the course of the six episodes (recut from four episode of the original release) the listener experiences the death throes of a doomed civilisation and the birth of something terrible – not through the eyes of the great and the good but through the eyes of an ordinary family – The Hartleys’.
Spare Parts takes us to Mondas at the point of the evolutionary dead end that would eventually give us the Cybermen becomes a necessity, the planet is dying, the population are weak and ill, and to survive the “Committee” with the aid of chief surgeon Doctorman Allan (Sally Knyvette) has devised the only logical way to ensure the survival of the people of Mondas, they are to become Cybermen….
This is no grand evil plan for universal domination, this is desperation pure and simple and that is the tragedy of Spare Parts, the road that has led the Mondasians’ to this cul-de-sac is the ONLY logical way to survive.
This story is about as bleak and as grim as a Doctor Who story can possible get – The Doctor (Peter Davison) & Nyssa (Sarah Sutton) arrive on Mondas, it is like a bleak version of the 1950’s a sort of Orwellian dystopia – if you have ever seen the Terry Gilliam film “Brazil” you will get the idea – TV announcements are all done in the frightfully posh received pronunciation and there is a rather fake blitz spirit of everyone pulling together while really the world falls apart, food is rationed, power is low, a curfew is in force and the Police who enforce it are “augmented” halfway points between human & Cyberman. We go back to the original premise of the Cybermen – Spare Parts surgery gone mad. Replacing limbs & organs is the norm on Mondas, the people who do it are not evil, they just want to survive, which brings me to the Hartley family – as ordinary a family as you could imagine Dad (Paul Copley), Frank (Jim Hartley) and Yvonne (Kathryn Guck) all making the best of things as the world crumbles around them. Poor Yvonne – it is her character more than any that represents the tragedy of the Cybermen, no spoilers but you will know the scene – genuinely moving, utterly abhorrent and tinged with tragedy – all of Mondas and its troubles personified in a frightened young girl. Chilling.
In a world populated by those who have no choice but to replace their bodies with steel, chrome and plastic the Cybermen seem inevitable – The Doctor cannot stop it, the Cybermen are part of established history, but can he get a small victory, can he change them at all?
The whole production has a feeling of claustrophobia and fighting against the inevitable. Never before has Doctor Who had such a sense of futility. As for the Cybermen themselves Nick Briggs absolutely nails the Mondasian voices giving distinct character to the different Cybermen, especially Commander Zheng (remember Cybermen had names in their Mondasian form) and his portrayal of ****DELETED FOR SPOILERS**** would bring a tear to the eye of even the most stiff upper lipped fan. We also have Derren Nesbitt as Black Market Organ trader Thomas Dodd – as slippery and morally ambiguous as they come still trying to make a fast profit as the world crumbles around him.
If you have the asking price then I urge you to buy this classic, it really is a thing of beauty. If you don’t then the standard version is just £2.99 – and it is a story that ALL Doctor Who fans have to hear. If this were a TV story it would be up there with Talons of Weng Chiang, City of Death & Blink in fan polls. It is a very human story about people voluntarily surrendering their humanity, it stayed with me on its original release and it is haunting me now on listening to the reissue. Mondas must survive. At all costs. A distorted reflection of our own world and a magnificent 10/10
Posted by Blog Finish at 19:00