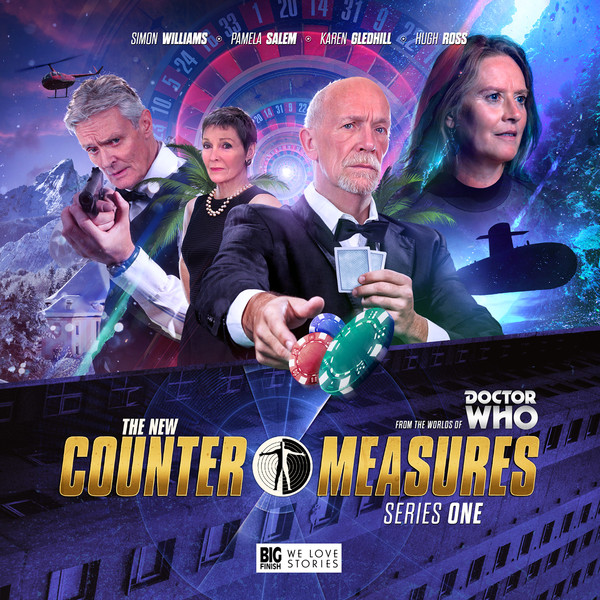 And they are back! After the "pilot" episode earlier this year “Who Killed Toby Kinsella?” (review HERE)  the Counter Measures team are back together for a series of off beat espionage adventures, but this time in glorious 16mm film with  a funky rather than a jazzy soundtrack, because we have arrived in the 1970’s.

For those of you that have not heard “Who Killed Toby Kinsella?” this review contains significant spoilers so I suggest listening to it first? You can buy it HERE - all caught up? Marvellous. So Sir Toby Kinsella ISN'T dead, in fact he is thriving with his team back together from their apparent deaths in the original Counter Measures - they have a new base in the Post Office Tower, but apart from the change of decade, the change of setting and the change of incidental music it is pretty much business as usual for the Counter Measures team.

The emphasis in this box set is slightly different from the previous 1960’s based Counter Measures, there is no over arching plot, the episodes are stand alone and this works both for and against the set as we shall see. The series is split in to four stories:

Group Captain Gilmore (Simon Williams) goes undercover with a gang of bank robbers who seem to have perfected the power of invisibility, but the device that is being used is far more clever than an invisibility cloak and far more dangerous to the user. The device makes those around not notice that you are there until you interact, it also makes the user forget who they are and lose their sense of self. A tense beginning to the set and an examination of what it means to be the person that you are. Can a decent man like Ian be influenced by a machine to forget who he is to the extent that he does awful things? And if so what of those with weaker wills and weaker senses of self - could this technology be exploited for more than just robberies and be used on the population? Luckily we have Sir Toby (Hugh Ross) Rachel (Pamela Salem) & Alison (Karen Gledhill) on our side.

This is my favourite episode of the set, its creepy, its claustrophobic, it plays on paranoia of confined spaces and thematically it follows on from the first episode as the sense of self of our heroes is attacked. The team are sent to investigate a crashed Nuclear submarine that recently went off grid. The crew are missing, the whole sub is deserted apart from one lone survivor from an experiment into psychic soldiers. What follows is the team being manipulated to act against their nature - Sir Toby taken back to when he was at public school, Ian as a gunner in the RAF, Rachel being dominated by an over bearing mother, Alison given the chance to be a mother - using these phobias and desires to manipulate the team in to giving up the nuclear secrets of the Submarine, Its tense and its a difficult listen and it really does make use of the stand alone nature of the stories to tell the best story it possibly can in the time it is given. Bravo.

3. The Phoenix Strain by Christopher Hatherall

This is a bit of an oddball story, almost tongue in cheek - it an homage in part to Alfred Hitchcock’s “The Birds” and to all those 1970’s films about animals going crazy like “Night of the Lepus” and “Piraña”. London is being plagued by attacks from killer birds and the grieving fiancee of a former pupil of Rachel’s could hold the answer. But what is the answer? Surely the powers that be would not be developing biological warfare to use against their own population? Sir Toby crosses swords with Lord Henry Balfour (David Rintoul) in his quest to expose the truth and stop the killer birds. As I said, an odd story, quite camp and tongue in cheek and tonally very different from the first two of the set - more brutal and graphically violent, yet sillier in an odd sort of way.

4 A Gamble With Time by John Dorney

Now THAT Mr Dorney is a cheeky title! A Gamble With Time was the original title of the Doctor Who story that eventually became City of Death. This story does not feature Mona Lisa’s Jagaroth or John Cleese - it features a very clever (actually not so clever) confidence trick played out against the backdrop of Monte Carlo glamour and casinos. Gus Kalworowsky (Tam Williams) has alien tech to sell, he has alien tech that allows him to travel in time and he proves his point to Lady Suzanne Clare (Carolyn Seymour) by apparently travelling in time and taking her casino to the cleaners on the blackjack tables. Lady Clare is an international arms dealer and a nasty piece of work who is au fait with alien tech and wants the time travel device. What follows is a 1970’s style take on Hustle as con follows con and a new enemy in Lady Clare is set up for future sets.

A mixed bag of stories, from tense claustrophobia, to camp to con tricks - this is a New series in a new decade playing with possibilities and finishing on a hook that I hope will be followed up in Series 2. A funky and flared trouser take on the “Spy-Fi” genre and a very promising start 8/10.
Posted by Blog Finish at 09:46