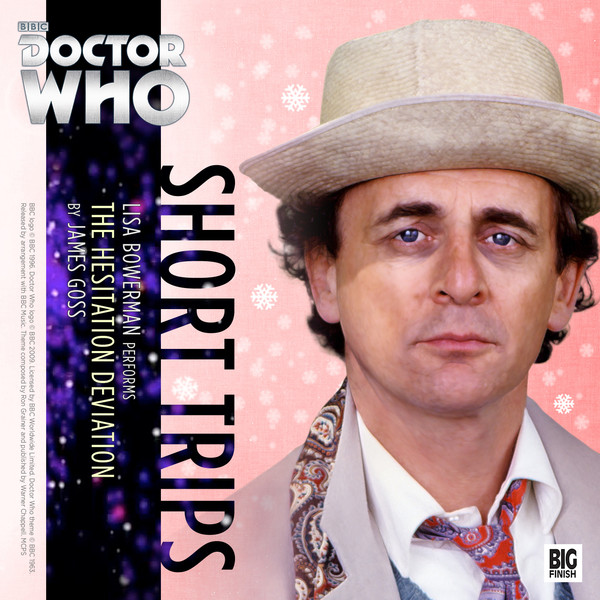 What is it with The Doctor & Christmas? as far back as 1965 he was getting it wrong all Z-Cars & Keystone Cops style and in more modern times he has fought off invasions and even succumbed to a regeneration on Xmas day. Yes indeed Xmas is not a good time to be The Doctor, which is a shame as he seems to love it.

In this month's festive Short Trips release we see the Doctor in his Seventh Incarnation throw off his melancholy machiavellian personality and seemingly go back to his season 24 joie de vivre as he takes Bernice Summerfield to a planet that does Christmas properly. A planet where all talk of it is banned until the festival approaches and then the denizens go all out - snowmen, present, mulled wine, mince pies, carols the whole kit and caboodle - so surely THIS time, on a Christmas planet things cant go wrong. Can they?

Oh yes they can, and as narrator Lisa Bowerman narrates the plot from the point of view of Bernice we see that Bernice has an awful decision to make. To save the Doctor she must forget The Doctor forever, she must retain no memory of him at all because on the Christmas planet a terrible trap has been set, and to know of the Doctor is to want to destroy The Doctor….

Lisa Bowerman captures the breathless, breakneck speed of the situation that Bernice and The Doctor find themselves in, she also provides the framing narration where Bernice discusses her situation with a robo therapist and as the plot develops the two threads become nicely interwoven and provide a very satisfying pay off.

Like pretty much every Doctor Who Christmas special this is lightweight throwaway stuff, not groundbreaking or a classic - but Lisa Bowerman instills a sense of fun and urgency to the 35 minutes of the stories length and it is always a treat to have a Bernice centred story.

As Christmassy as a mince pie and a glass of port as this is I hope that The Doctor odes get a perfect Xmas one day! 7/10.
Posted by Blog Finish at 09:44