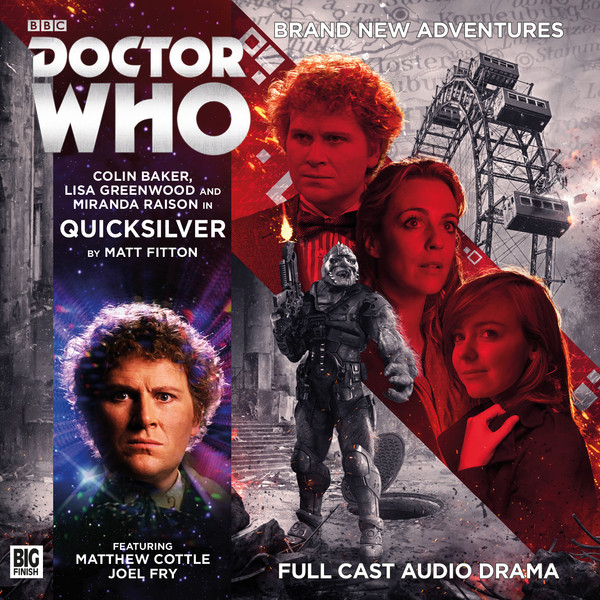 Parting is such sweet sorrow as a wordsmith much greater than I could ever dream of being once wrote - and this story begins with an ending. Of sorts. Ladies and gentlemen we are at the finale of the 2016 Main Range releases, we have arrived at release 220 “Quicksilver” and to quote Bobby Ball “its a little belter”. So where to begin? well at the beginning of course and I said earlier Quicksilver begins with an ending, or at least an attempt at an ending….

Long time Big Finish listeners will remember that at the end of the last release “Absolute Power” (review HERE) Mrs Constance Clarke (Miranda Raison) decided that she had had enough of her travels with Old Sixie and wanted to go home, back to World War 2, back to Bletchley Park and back to her husband Henry - but when The Doctor drops her back off at her London home one autumn morning Mrs Clarke is in for a rather upsetting surprise, because Mrs Clarks discovers to her horror that her husband Henry is lost in action, presumed dead. This first episode is a wonderful character piece between Mrs Clarke & Old Sixie - what is not said is as heartfelt and as poignant as the words that pass between them - Mrs Clarke’s stiff upper lip begins to wobble and Miranda Raison opens up another level to this most multi faceted of companions -and that dear readers is only the beginning because Matt Fitton has thrown the kitchen sink at this one, want to know more? Of course you do.

The tragic news for Mrs Clarke is only the beginning, only one of a series of events that will lead to an alien war being wrought in Vienna of 1948, a startling discovery and the return of a much missed companion - yes on top of everything else this release heralds the return of one Phillipa Jackson, or simply Flip to her friends (Lisa Greenwood) last seen floating towards the earth a few years ago, but not very pleased to have been transported on her wedding day to 1948 Vienna. There is a classic scene where Mrs Clarke and Flip meet, neither knows of the others history with The Doctor - and suddenly realisation dawns on both of them, you can visualise the looks on their faces - and what a pairing these two make, separated in time by 70 years or so and in class by a yawning chasm - but they are a kindred spirt - the Doctor really does pick his companions well.

And what of the rest of the plot? its very difficult without spoiling as there are a fair few surprises as characters motivations are made apparent and the threat of the aliens chasing lost alien warlord Kinvar (Joel Fry) is played out - and what of the Quicksilver of the title? Well its a plot device that sets up the whole chain of events and is also used very cleverly in the resolution. Old Sixie shows his moral crusading side by giving grandstanding speeches about Communism & McCarthyism whilst all along being the cleverest person by far in the proceedings, one step ahead at least of the tangled web that the Quicksilver device has created, and Mrs Clarke? what can I say about Miranda Raison that I have not already said? she continues to imbue Mrs Clarke with layer upon layer, adding vulnerability and compassion to the already heady mix of character traits and the tease of further adventures to come with Old Sixie and Flip is real “punch the air” territory.

Quicksilver is another fantastic release and gets the mix of character drama, cold war thriller and alien war blockbuster just right, its a something for everyone story, but mostly, underneath it all, when you strip back the alien devices, Russians, warlords, aliens and post war Vienna tailors shops - this is a story of Mrs Clarke realising that her place is with Old Sixie - and long may she be there 10/10.

This title was released in December 2016. It will be exclusively available to buy from the BF website until January 31st 2017, and on general sale after this date.
It’s the telegram Constance never wanted to read:
Those classified operations concerned a top-secret military project code-named ‘Quicksilver’. A project based in Vienna. A project with alien connections.
But bombed-out Vienna is not what it was before the war – with its Strauss music, its glamour and easy charm. It's not the time nor the place for a happy reunion. As Constance Clarke is about to discover...
And as the Doctor is about to discover, too!
Written By: Matt Fitton
Directed By: Jamie Anderson