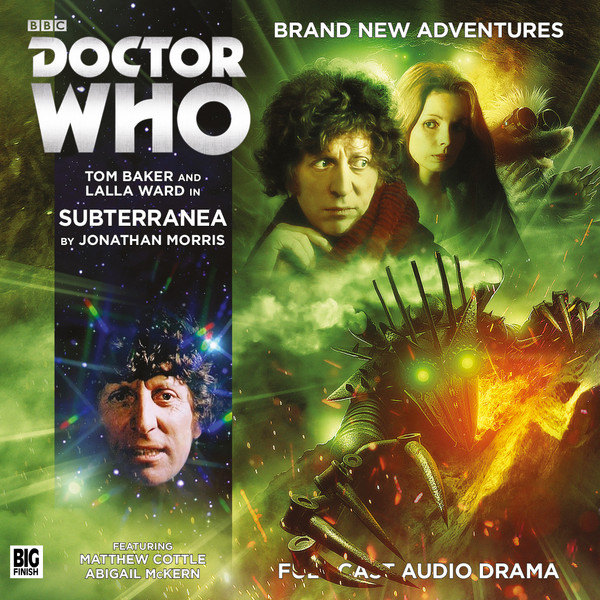 Now dear readers, I know what you are all thinking – “Ed, you haven’t provided us with a musical interlude for a while, isn’t it about time for another?” And do you know I think you are right, not since last November or so have I delved into the old musical interlude – but for this months Fourth Doctor release I think a musical interlude sets the tone, so sit back, relax and enjoy Underground by Tom Waits
There you go, that was fun want it? and it ties in very nicely with Subterranea – a story of a world going on underground, a story of mole people and sort of Cybermen-like monsters called Silex all driving around in giant mining machines called drill towns – and it is rather fun. Again it may look like a Season 18 story, it may have the theme tune from season 18 and Tom may be in burgundy but this story is pure season 17 in its ethos. The supporting cast of Maxwell Wilberforce Bell (Matthew Cottle), his wife Lucretia Bell (Abigail McKern) and Mr Jelicho Wigg (Robbie Stevens) are pure panto and chew the scenery almost as well as their mining vehicles chew the earth that they travel through.
Tom and Lalla seem to be having a ball with the script and you can just see them on screen with “Underworld” level of production values mugging to the camera for all they are worth and playing the script for laughs, because believe me this is a script in which all the players get to “give a turn”and it is all the bette for it. Maxwell bell COULD have been played completely straight, but as a slightly camp Captain who insists on wearing his hat all the time he is a memorable addition to the story rather than a forgettable bit part, and his wife Lucretia may not have written the book on arch but she has certainly bottled the ink.
The weak link in the story is in fact the monster o the month – as a steam powered derivative of the Cybermen the Silex are meant to be a terrifying threat but come across as a distraction – I wanted to hear more of Maxwell Wilberforce Bell and his drill town not a rampaging converted monster (maybe its just me, but think of it like The Stones of Blood, wouldn’t you have fathered Tom & Amelia Rumford waxing lyrical rather that the actual plot? well its like that)
But overall its a fun romp, not earth shattering (no pun intended) but a fun little runaround with some peril, some thrills, some spills, some explosions and some very funny lines.
The story fails as a season 18 pastiche, but rewind a year to the glory years of Graham Williams and this would fit rather nicely alongside The Creature From the Pit and is all ht better for it. A steam powered, slightly silly 7/10.