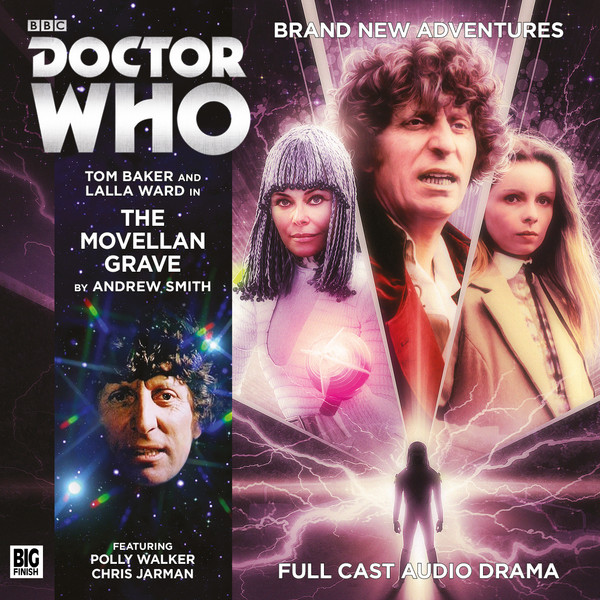 I have decided to rename series six of the Fourth Doctor Adventures. Well not quite the series but the season it is ostensibly set in. It may have the theme music of season 18 but thematically it feels a lot more like a progression of season 17, so from now on (in my mind at least) this is set in Season 17.5. Glad I got that off my chest

So Season 17.5 continues with The Movellan Grave, and more a-typical a Doctor Who story you could not wish for. It just feels EXACTLY like Who used to feel back in the 1970’s. Doctor and Romana discover something is not quite right, go and investigate, ingratiate themselves with the people involved, discover what is going on and have an adventure. This story follows that pattern almost to the letter, but do you know it does it with total panache and style that it feels fresh and new and exciting. It actually has a “New Who” feel about it as it is pacy whilst retaining the charm of season 17.5. It also does what 1970’s Who did very well and “borrows” or plunders or pays homage to sci-fi of the big screen, in this case Terminator 2, there is a scene in episode two that…. – but I get ahead of myself.
Yes Terminator 2, albeit Terminator 2 on a BBC budget (even on audio) and as I have not mentioned it already (although the title may give it away) it features the most Disco aliens ever to feature in Doctor Who – The Movellan’s.
You see a Movellan power pack has been found in an archaeological dig and this draws The Doctor (Tom Baker) and Romana (Lalla Ward) to the scene where they meet archaeologists Carrie Pierce (Camilla Power) and Robin Lyon (John Banks) who are very sceptical when The Doctor and Romana explain the power packs extra terrestrial origins, but soon there is a buried Movellan spaceship uncovered, and a Movellan secret weapon in the war against the Daleks, a mutant, augmented Movellan called Chenek (Chris Jarman) – an unstoppable force created to be the ultimate warrior and coming back to episode two he does a mean T-1000 chasing down Tom et al in a land-rover which brings back memories of the on foot chase after the motorbike n Terminator 2.
Its very exciting stuff but not all adventure, explosions and chases, underneath the window dressing this is a morality tale about the ethics of war and of methods used to develop weapons of mass destruction. And it also has spangly disco robots as well.
This was a story I was expecting to be a bit of a filler, the calm before the end of season two parter but it is nothing of the sort, it is a breath of fresh air and a complete redrawing of the rules on telling a more traditional Who story without breaking what makes stories of the era so special. Judgement day on this release gives a favourable verdict of 9/10.