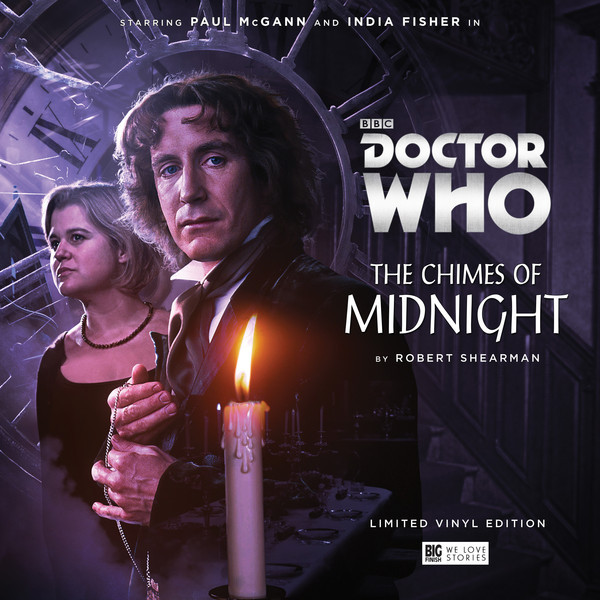 Some stories are talked about in a sort of reverent hushed awe, Talons, Web of Fear, Inferno, The Curse of Fenric from the classic series, Blink, Human Nature & Dalek from the new series. Dalek – I wonder what happened to the writer of that one???? I jest of course as Rob Shearman is the writer of this months very very special release from the Big Finish archive (and yes I know he wrote this before Dalek

) So back to classics, on TV we had a sum total of one full story and a regeneration for Doctor number 8 – his era was firmly in the audio realm at Big Finish (as confirmed by his Regeneration speech) and he had a fair few classics (and probably will have a fair few more) but The Chimes Of Midnight is one of “those” stories, talked about in the same hushed reverent tones as The Daemons & City of Death, yes indeed ladies and gentlemen we have one of those rare beasts, we have a classic.
Voted the most popular Big Finish main range release this was always going to be the first release to get a very special edition – Vinyl no less, a four L.P (remember them) release with the story re-cut into a six parter one part each taking up one side of 33 rpm disc and the final disc being the special features. At £79.00 its not cheap, but it is strictly limited to 500 copies so will almost become an instant collectors item and it is rather beautiful – the artwork really conveys the atmosphere of the story, and if you are one of those people who view listening as a tactile experience there is the smell of the vinyl, the feel of the cover and the slight hiss and crackle as the L.P spins on your turntable that you just don’t get with a CD or a download – there is something almost reverent in the act of playing an L.P – but what of the story and why is it a much heralded classic? If you have not heard it then where have you been since February 2002 (WHERE have 14 years gone???) but I will try to capture a little of the flavour of it.
The Doctor (Paul McGann) and Charley Pollard (India Fisher) materialise in an Edwardian house on Christmas Eve, all the trappings of an upper middle class or lower upper class household are present, the Butler, the Cook, the Scullery Maid, the Chauffeur, the Ladies Maid – all very Upstairs Downton (see what I did there

) but the Doctor and Charley have seemingly jumped a crack in time as they are not quite “there” yet, they cannot interact with their surroundings, pulled crackers reverse, broken jam jars repair – and the household staff cannot interact with them yet either – only Charley & Edith the scullery maid (Louise Rolfe) seem to have an affinity through the void, and then Edith is murdered and the Doctor & Charley “arrive” cast as amateur sleuths, and then everything goes to hell as a murder will be committed on the hour every hour up until the Chimes of Midnight and the arrival of Christmas Day. First of all this is a scathing social comment on the attitudes of the early 20th century of the class system and how those servants with a little bit of pull feel that they can lord it over the servants lower down the order – Edith is constantly told by Mrs Baddeley the cook (Sue Wallace) & Mr Shaughnessy the Butler (Lennox Greaves) that she is nothing and no-one that she is stupid and dull, secondly this story is not at all what it seems – on the surface a by the numbers Agatha Christie style murder mystery Rob Shearman utterly subverts the genre of both the murder mystery, the Doctor Who story and lays the foundations for the more character based, emotional Doctor Who we have enjoyed since 2005 – because at its heart this story is about a single act of perceived kindness and strip away all the sci-fi or fantasy trappings and we are back to the British class system and the changing attitudes of the era and the consequences of the attitudes of a strict pecking order…..
If you have the money and own a record player then its a no brainer, just go out and buy it. If not then the download of the original release is available for a mere £2.99 here. Its a classic pure and simple – to misquote Mrs Baddeley “Christmas really wouldn’t be Christmas without the Chimes of Midnight” 10/10.